Indeed, the two-meter long cannon produced a whopping 6 tons of recoil that produced vibrations powerful enough to crack fuel tanks, break avionics systems, and reliably cause landing lights to fly off their mountings. 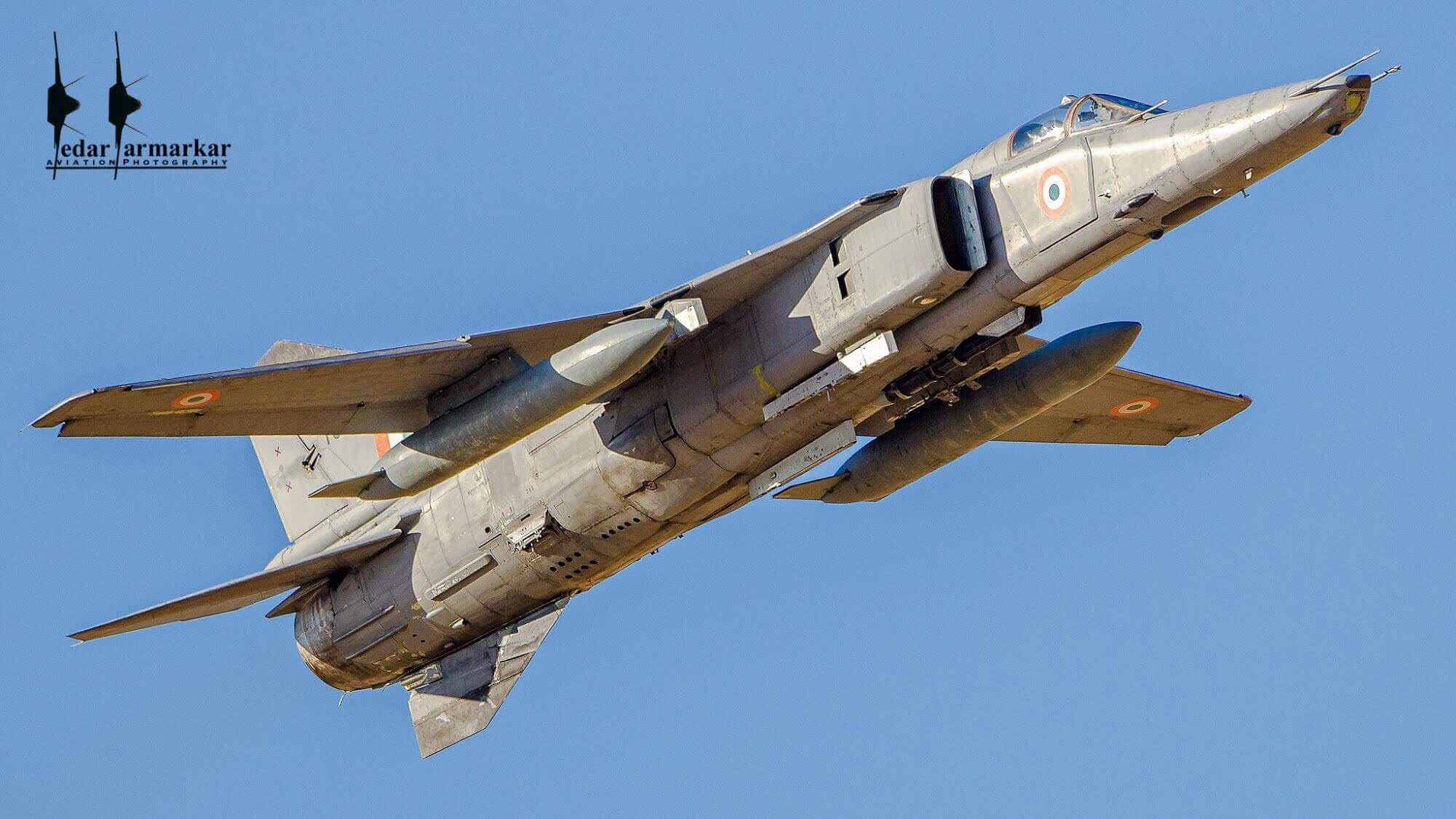 On December 27, 2019, the Indian Air Force bade farewell to the last of the beefy MiG-27 attack jets it had dubbed the Bahadur (“Valiant”) in a ceremony held by No. 29 squadron at Jodhpur air station.

MiG 27 takes its last flight for the IAF:

The powerful swing-wing jets were a Soviet wᴀʀplanes license-built by India and upgraded with 2000s-era avionics. Armed with unguided bombs, rockets and an earth-shattering six barreled Gatling guns, the type had seen extensive action during the 1999 Kargil wᴀʀ, blasting Pakistani troops on Himalayan peaks at 18,000 feet above sea level.

Distinguished by its flattened ‘duck bill’ nose leading some pilots to nickname it ‘the Platypus,’ the MiG-27 was not widely exported like the MiG-23 fighter it was spun off from. But aside from combat service in India and Sri Lanka, perhaps it best ought to be remembered for mounting a huge Gatling cannon that threatened to shake the armored wᴀʀplane apart. 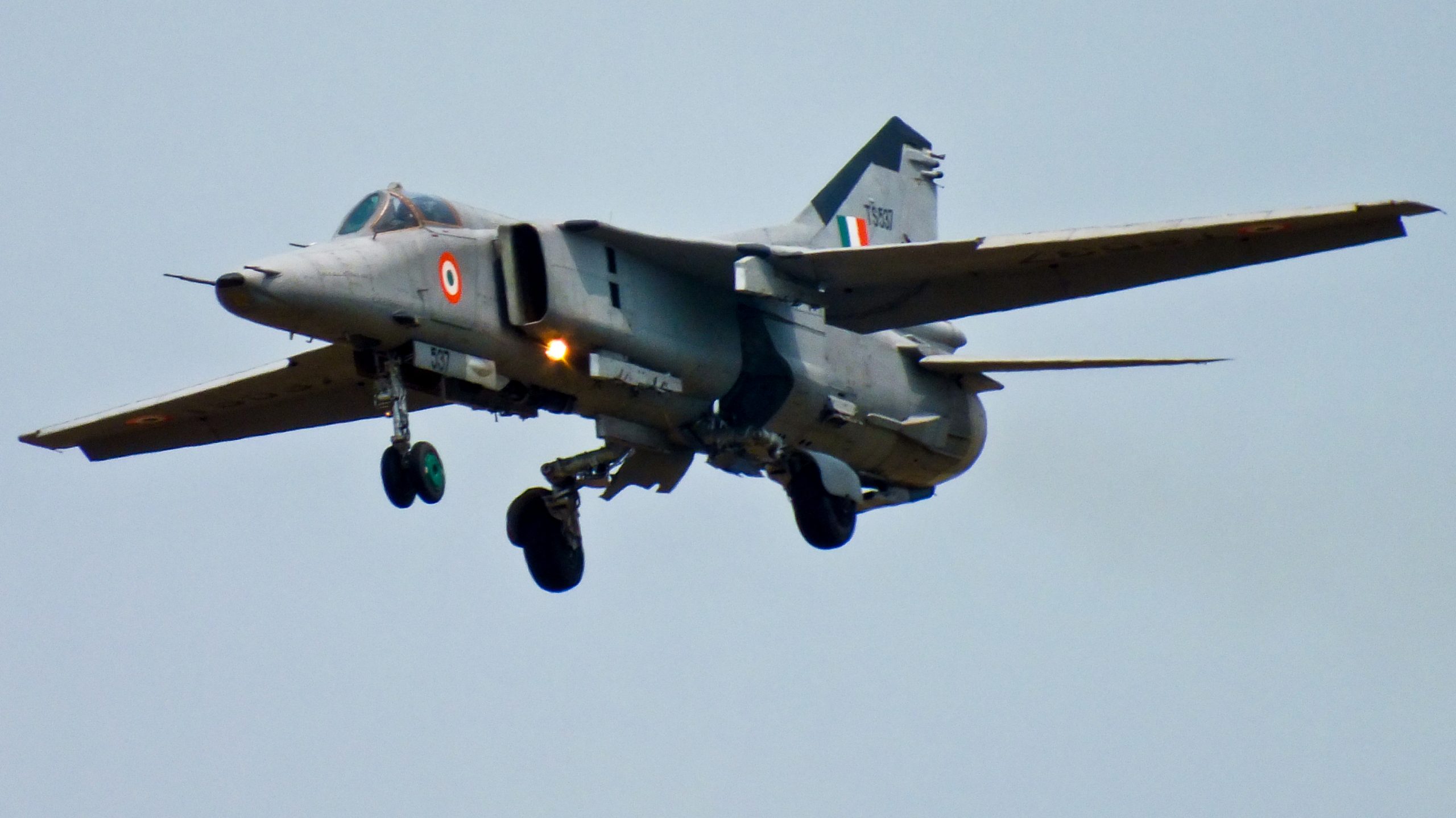 While the Sukhoi design bureau developed the improved Su-17/Su-20/Su-22 “Fitter” family of supersonic attack jets and the armored, subsonic Su-25 Frogfoot, rival Mikoyan-i-Gurevich opted to create ground-attack model of its forthcoming MiG-23 ‘Flogger’ single-engine fighter. A late-coming Soviet response to the American F-4 Phantom, the MiG-23 was a fast but temperamental beast due to the trickiness of its swing-wing mechanisms.

The first ground attack variant was the MiG-23B, codenamed the Flogger-F by NATO. This had a down-sloped nose for better visibility, steel and aluminum armor fitted around the cockpit and engines, and a then-sophisticated jamming and radio navigation system. It ditched the MiG-23’s air search radar for a laser-rangefinder. The production MiG-23BN model also used a Tumansky R-29 turbojet with superior low-speed performance.

This was a Flogger meant to get down and dirty at high speeds, unleashing 23-millimeter cannon shells, unguided bombs and rockets on enemy troops. The MiG-23BN could also make use of radio-command guided Kh-23 missiles and radar-seeking weapons, as well as short-range K-13 or R-60 heat-seeking air-to-air missiles for self-defense. 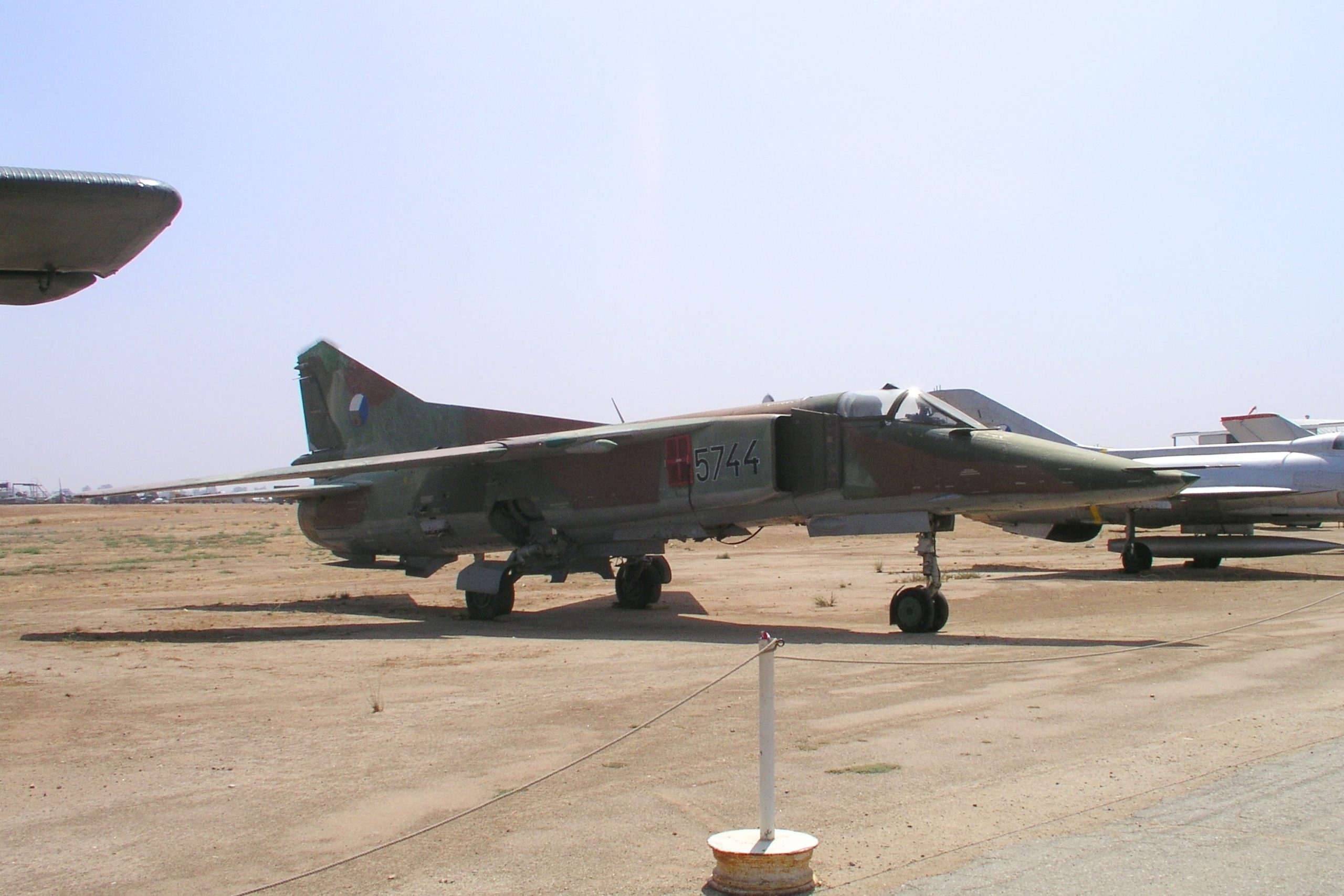 However, the MiG bureau followed the MiG-23BN with a more extensive redesign rebranded the MiG-27 (Flogger-D) with modified engine intakes and ruggedized landing gear, decreasing maximum speed to Mach 1.7 at 26,000 feet, but increasing the Flogger’s maximum weapons load to 8,800 pounds mounted on five hardpoints (or seven hardpoints at the expense of swing-wing capability).

The MiG-27’s hydraulically-actuated swing wings allowed it to tailor performance to the situation: fully extended at 16 degrees, they afforded it superior lift and low-speed handling. Fully swept-back at 72 degrees, they allowed excellent supersonic performance for making a fast getaway after unloading weapons. An intermediate 45-degree sweep was standard for routine flying. 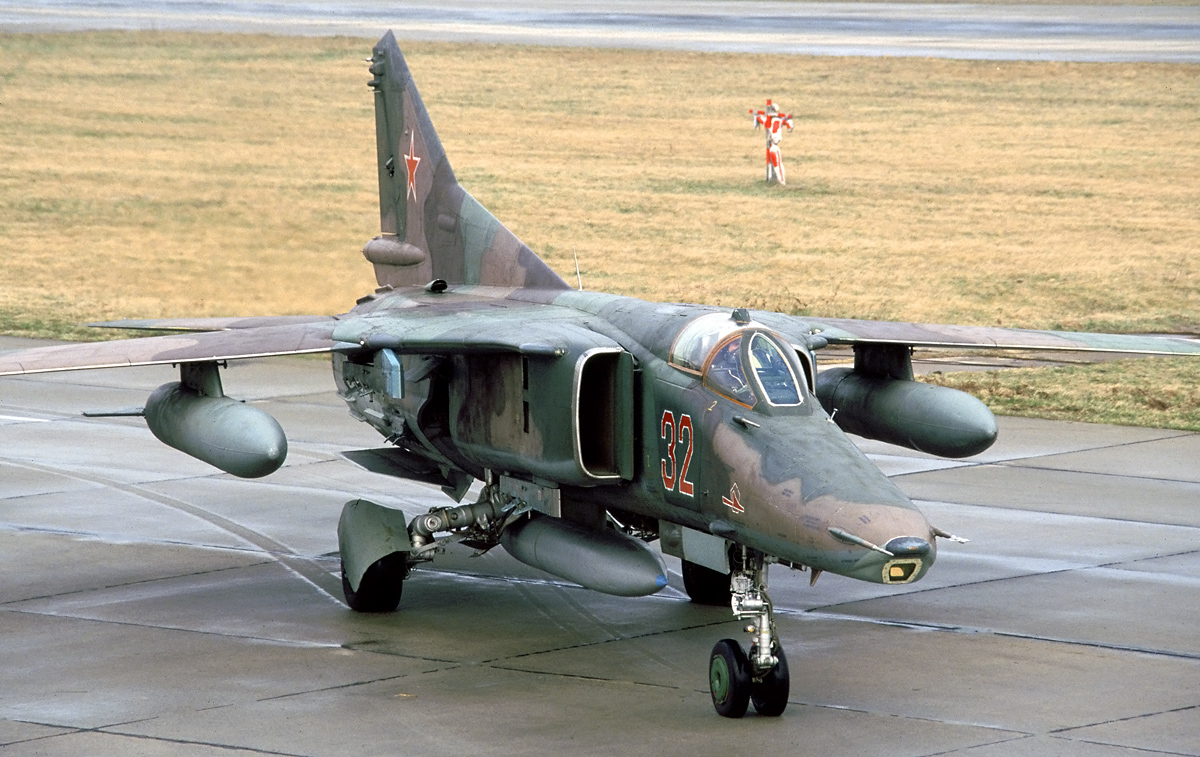 The MiG-27 also swapped out the MiG-23’s twin-barrel 23-millimeter cannon for a monstrous six-barrel 30-millimeter GSh-6-30 cannon slung in an under-fuselage gondola at a 1.3 degree offset, drawing from 300 rounds stored in the fuselage.

The huge Shipunov gun had a cyclic fire-rate of 5,000 rounds per minute (see this video), and its gas-operated system spun to maximum firing rate faster than the hydraulic mechanism on the famous 30-millimeter GAU-8 Avenger cannon on American A-10 aircraft.

Indian pilot Anshuman Mainkar described what it was like to fire the huge gun in an interview by Hushkit.net:

“The aircraft seemingly came to a stand-still, engrossed with its target – tracers creating an illusion of morse communication. Smoke and the smell of cordite entered the cockpit, and in a flash it was all over…the airframe shuddered during the trigger pull, and surge was a possibility, hence the exit had to be smooth and deliberate.”

Indeed, the two-meter long cannon produced a whopping 6 tons of recoil that produced vibrations powerful enough to crack fuel tanks, break avionics systems, and reliably cause landing lights to fly off their mountings—not a good thing for pilots hoping to make a night time landing! Even landing gear doors sometimes tore from firing, resulting in accidents.

The VVS Frontal Aviation took in 360 MiG-27s through 1977 before 197 modernized MiG-27K and 162 slightly simplified MiG-27M models (Flogger-J2 and J) were phased in with new avionics including improved jammers, radar wᴀʀning systems, and a lock-maintaining laser targeter compatible with laser- and TV-guided KAB-500 bombs and Kh-25 and -29 missiles.

Despite the problems with the cannon, the MiG-27 reportedly otherwise deemed a reliable, smooth-handling aircraft. Though not particularly agile, it was both fast and a stable firing platform with good low-speed performance.

Unlike MiG-23s of all stripes or its rival the Su-17/20/22, the MiG-27s issuing from Soviet factories were reserved for Soviet tactical air force (VVS)—with the notable exception of 165 license-assembled by Hindustan Aeronautics Limited in India. 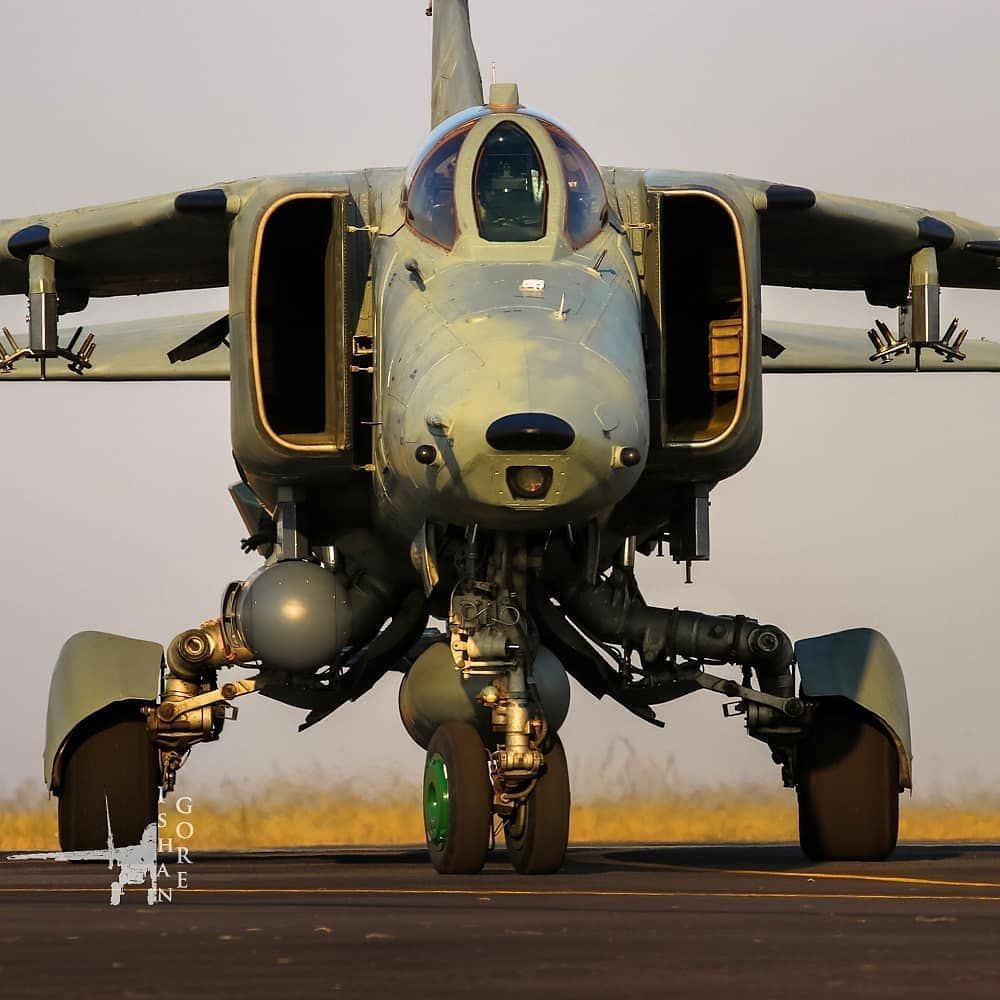 In the end, only a single regiment of Soviet MiG-27s saw action during the Cold wᴀʀ, deployed to Shindand airbase in Afghanistan in 1988 through February 1989. They were principally used in high-altitude raids and reportedly made effective use of ODAB-500P fuel air explosives with a ᴅᴇᴀᴅʟʏ blast radius extending as far 400 meters. However, many of the MiG-27’s advanced capabilities were judged to be ovᴇʀκιʟʟ for counter-insurgency operations.

After the dissolution of the Soviet Union, Russia swiftly phased the type out of service by the mid-1990s.

MiGs versus Tigers Over Sri Lanka 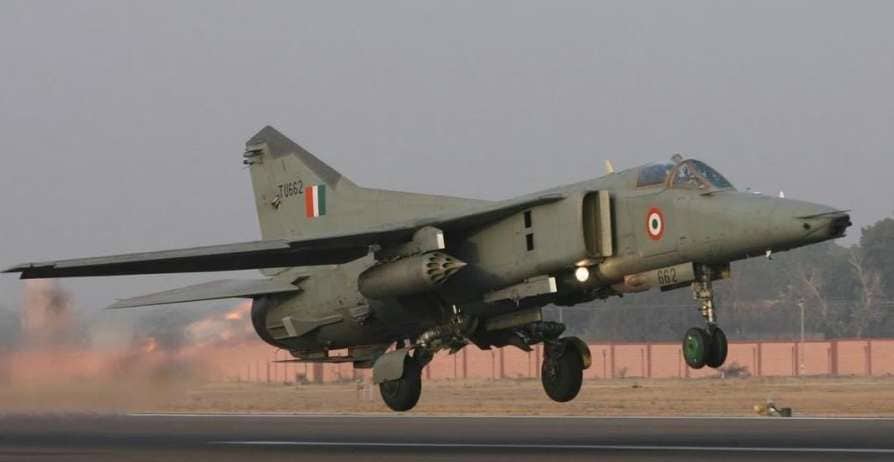 However, both Ukraine and Kazakhstan inherited MiG-27s from the Soviet Union. The latter sold six MiG-27s and a MiG-23UB two-seat trainer to Sri Lanka, ostensibly to launch fast, low-altitude attacks against Tamil Tiger (LTTE) rebels potentially armed with heat-seeking missiles.

As in Afghanistan, a supersonic jet was probably ovᴇʀκιʟʟ for a counter-insurgency wᴀʀ, and leaked documents suggest the purchase may have arisen from a corrupt backroom deal.

An article by Shamindra Ferdinando details the jet’s rocky career in Sri Lankan service. MiG-27s arrived in June 2000 and began to see action in No. 12 squadron two months later, initially piloted by Ukrainian mercenaries in strike and close air support missions. You can see some footage of Sri Lankan MiG-27s here.

The MiG-27s, however, suffered heavy attrition: First, one crashed into a house near Colombo in August 2000 near the Colombo airport, κιʟʟing its Ukrainian pilot. Another was destroyed in an LTTE commando raid on Katunayake airbase in July 2001. A third crashed into the Indian Ocean in 2004, and a fourth was damaged by ground fire. All of the surviving jets swiftly fell into disrepair following a ceasefire.

When a lengthy ceasefire broke down in 2006, the Sri Lankan government had the remaining jets overhauled and purchased enough new aircraft from Ukraine to again field a force of seven MiG-27s. It also received pilot training assistance from India. 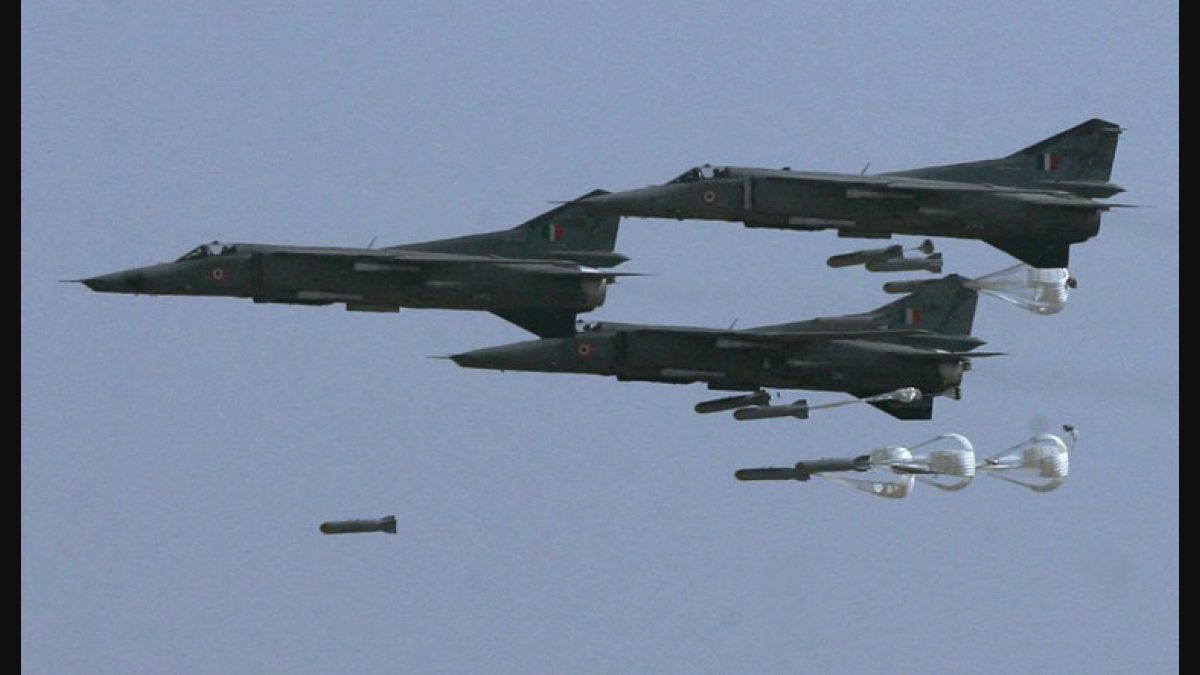 According to interviews by Shamindra, a MiG-27 also teamed up with an Israeli-built Kfir jet in the targeted κιʟʟing of LTTE political wing leader Subbayya Thamilselvan in his bunker at 6:20 AM on the morning of November 2, 2007, using four 1,100-pound bombs.

Following the conclusion of the so-called Eelam wᴀʀ IV in May 2009, the Sri Lankan MiGs continued flying for a few years, with one crashing in 2012. However, the aircraft then fell into disrepair again and were finally retired.

Check out a companion to read about the combat experience of Indian MiG-27s during the Kargil wᴀʀ.