Skip to content
Home Military The fastest manned rocket plane to date is the North American X-15, which can reach speeds of up to 4000 mph

X-15 is a hypersonic rocket aircraft designed and built by North American for NACA (later NASA) testing. It set speed records in the 1960s that remain unbroken some 60 years later. An unbelievably ambitious project that actually paid off. A lot of valuable data was gained and implemented into future aircraft design. 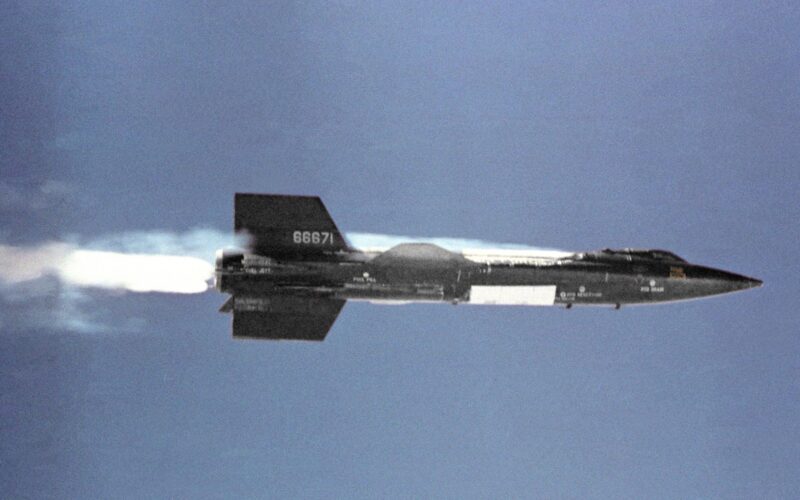 Even in the late 1940s aircraft designers were dreaming of speeds that not only exceeded the speed of sound but much much faster than that. The Douglas X-3 Stiletto was one such aircraft.

The Stiletto was intended to fly at twice the speed of sound – an extremely impressive feat for the early 50s. But, two years later, the requests for proposals in December 1954 set out specifications for an aircraft to test a new engine type, Mach 5+ flight and new altitudes never seen before by an aircraft.

But early jet engines lacked the power to propel even small and light aircraft to speeds faster than Mach 2. In an extremely oversimplified explanation, a turbojet engine will ingest air, mix it with fuel and produce thrust. Depending on the requirements, they will be tuned to work best at a given altitude to attain maximum performance.

Another factor key to top speed is drag or air resistance. If you go faster, the more the air will try to stop you. The feeling is apparent if you put your hand out of a moving car window. You’ll feel the air pressing against you. This is why at low altitudes even modern jet fighters will not get anywhere near their claimed top speed.

But the higher up you are in the atmosphere, the thinner the air becomes, meaning you can travel through it easier with less resistance. On the flip side, however, jet engines need that air to produce thrust. So fly too high and engine performance will drop significantly.

To combat the lack of air there is a fairly simple solution – rocket motors. They burn fuel without the need for air in the atmosphere. The oxygen required is carried in liquid form in a separate tank to the fuel itself. This means the greater the altitude, the higher the top speed.

The first rocket-powered aircraft was the German Heinkel He-176. But better known is the Messerschmitt Me-163 Komet. Even in 1944, the Komet was able to reach 620 mph in level flight, in testing an unofficial flight speed record was attained at 700 mph and not beaten until 1953!

Post World War II, as with many designs, anything that might be able to give the Allies an edge in future conflicts was of great interest including rocket-powered aircraft.

North American (NA) was given the contract for the X-15’s airframe in 1955, whilst Reaction Motors was to build the engines and only four years later, in June 1959 the first flight was made.

Unlike traditional aircraft design, the X-15 was never intended to take off under its own steam. Similarly to other experimental aircraft, such as the M2-F3 Lifting Body, the X-15 was designed to be carried by a “mothership”.

NACA/NASA used an older model B-52A that was retired in 1969 and a B-52B. Both were modified with a pylon on the righthand wing to carry test vehicles.

“Balls 8” first flew in June 1955 and was not retired until December 2004 making it the oldest flying B-52 and the only B model in service at the time.

A consideration required in the design phase was that the X-15 would need to fit under the wing of a B-52 meaning NA had to make it fairly compact. It was only ever designed to accommodate a single crew member and had an overall length of 50 feet 9 inches and a wingspan of only 22 feet 4 inches.

The X-15 was not a large aircraft with room for only a single occupant.

Naturally it had a very sleek profile, intended to reach hypersonic speeds. Meaning it was intended to be a serious performance machine. Mach 5 is considered to be hypersonic, which is anything over 3,836 mph.

Unfortunately, X-15-3 on the 65th flight test, crashed in 1967 when it went into a spin at hypersonic speeds whilst descending. It broke apart and scattered the wreckage across 50 square miles. The pilot Michael Adams, perished in the accident.

The only other accident was when X-15-2 crashed upon landing in 1962 which badly damaged the aircraft. After a lengthy repair, it had modifications made to carry liquid hydrogen, a fuselage extension of 2.4 feet, as well as a pair of auxiliary fuel tanks for much greater range.

The power plant was also a key consideration in the initial designs, the aircraft had to be built around two XLR11 rocket motors and the fuel tanks to propel it to the edge of space. All aspects of the design were aimed at making the X-15 the fastest, highest-flying aircraft ever.

Reaction Motors’ XLR11 was the same rocket used in the Bel X-1 and produced 6,000 pounds of thrust. But after only 24 flights and by the end of 1960, they had come up with an incredible upgrade.

The new XLR99 was almost ten times more powerful per motor and very similar in size. It output 57,000 pounds of thrust and was used for the remainder of the X-15’s service. This incredible performance was achieved by anhydrous ammonia and liquid oxygen.

Almost unbelievably, it could burn through 15,000 pounds of fuel in just 80 seconds.

Whilst the fuel consumption may seem ridiculous, it was enough for the X-15 to attain some amazing world records, some of which are still held today.

Speed was not only the impressive thing about the X-15, the altitudes it could reach also broke and set many records. The highest known flight was in 1963 when test pilot Joseph Walker hit an altitude of 67 miles, over 353,000 feet, at a speed of 3,794 mph (Mach 4.98). Any flights above 264,000 feet actually qualified the pilots to become Astronauts.

Whilst there was a tragic accident resulting in loss of life with the crash of X-15-3, overall the project spanning from 1955 to the final flight in October 1968 was a huge success. 199 flights were completed resulting in some of the highest and fastest flights to this day to ever be recorded.

The two surviving X-15s now reside as museum pieces and are a reminder that humans are capable of incredible things. I truly believe that the golden era for flight was between the end of World War II and the 1980s. So much was achieved in such a short period of time and changed the way we design aircraft forever.

Another Article From Us: Tupolev Tu-144 – The Soviet Concorde