The F-15 airframe in all its flavors will almost certainly spend an impressive half-century in active service—a first for a front line U.S. Air Force fighter.

For nearly three decades, the F-15 Eagle fighter was considered the undisputed king of the skies. Until the debut of its replacement, the F-22 Raptor, the F-15 was the U.S. Air Force’s frontline air superiority fighter. Even today, a modernized Eagle is still considered a formidable opponent, and manufacturer Boeing has proposed updated versions that could keep the airframe flying for the better part of a century.

The F-15 traces its roots to the air wᴀʀ in Vietnam, and the inauspicious showing of American Air Force and Navy fighters versus their North Korean counterparts. Large, powerful American fighters, designed to tackle both air-to-air and air-to-ground missions, were performing poorly against their smaller, less powerful—but more maneuverable—North Vietnamese counterparts. The 13:1 κιʟʟ ratio American fliers enjoyed in the Korean wᴀʀ dropped to an abysmal 1.5 to 1 κιʟʟ ratio in Vietnam. 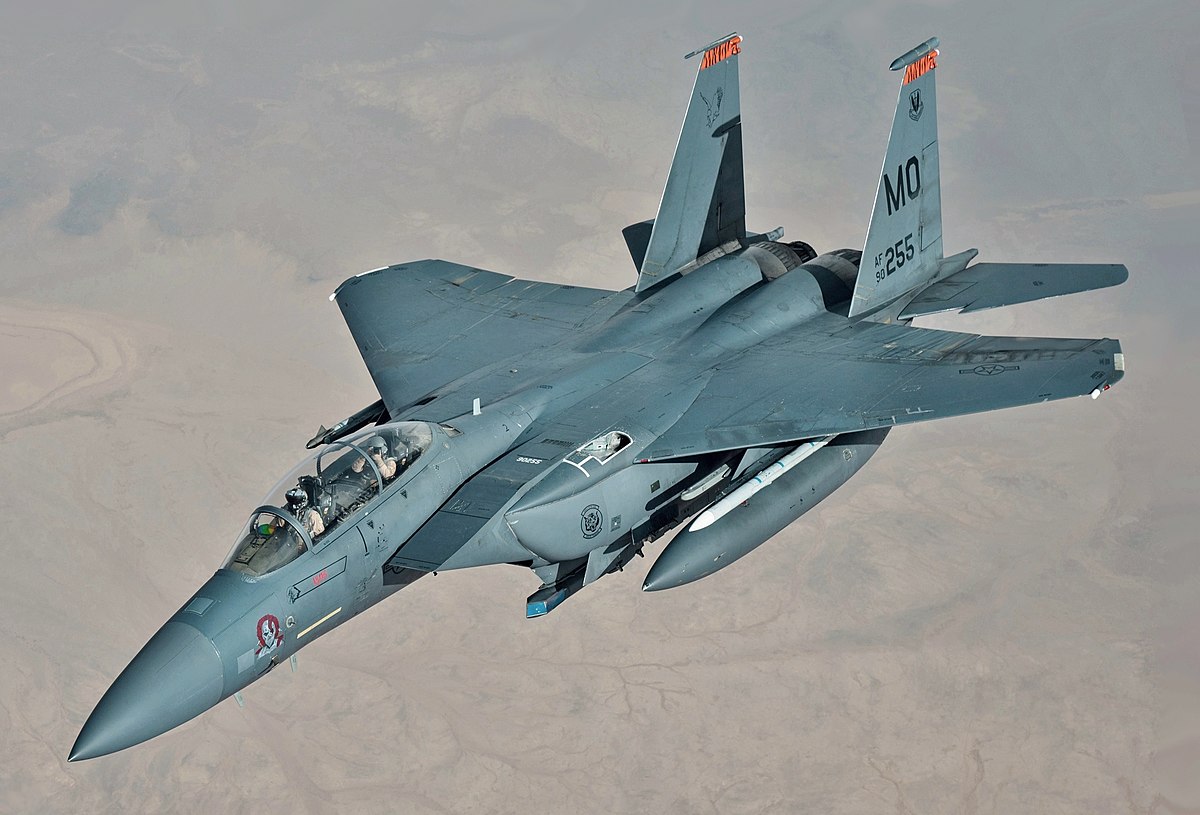 Contemporary fighters, such as the F-4 Phantom, had been designed under the assumption that the air-to-air missile had rendered dogfights obsolete, and with them the need for superiority maneuverability and a gun for air combat. The U.S. Air Force decided it needed a dedicated air superiority fighter, one that combined two powerful engines, a powerful radar, a large number of missiles and a gun. Above all, it had to be maneuverable enough to win a dogfight.

The Air Force issued a request for proposals for the new FX fighter in 1966, and no fewer than six companies submitted competing paper designs. No prototypes were built. The air service selected McDonnell Douglas (now a part of Boeing) in 1969, ordering 107 full-scale development planes.

The F-15 was a formidable aircraft. Early versions were powered by two Pratt & Whitney F100-PW-100 afterburning turbofan engines, producing 14,500 pounds of static thrust—23,500 with afterburners. This gave the aircraft a thrust-to-weight ratio of greater than one, making it so powerful that it was the first fighter to exceed the speed of sound in vertical flight. The F-15 had so much thrust it could climb to sixty-five thousand feet in just 122 seconds. In horizontal flight, the F-15 could reach speeds of Mach 2.5, and cruise at speeds of Mach 0.9.

The Eagle’s AN/APG-63 nose mounted radar was the most advanced of its day, a solid state radar with “look down/ sнoot down” capability and a range of up to 200 miles. This allowed the F-15 to pick out low-flying enemies on radar against the clutter generated by the ground. The radar was also the first to incorporate a programmable system processor, which allowed moderate upgrades to be done via softwᴀʀe and not intrusive hardwᴀʀe updates.

The Eagle was originally armed with four radar-guided AIM-7 Sparrow missiles for long-range engagements and four AIM-9 Sidewinder infrared guided missiles for short-range engagements. In the air wᴀʀ over Vietnam, USAF F-4C Phantoms, lacking a dedicated gun, missed several opportunities to down enemy aircraft. This was ʀᴇмᴇᴅιᴇᴅ in the F-15 by equipping the plane with an internal M61 Vulcan twenty-millimeter gatling gun.

The F-15 was also designed with long range in mind. Carrying three six-hundred-pound fuel tanks, the F-15 had a range of three thousand miles, making it possible to fly from the continental United States to Europe without stopping or midair refueling. This would make it possible to quickly reinforce NATO air defenses in case of a crisis in Europe, and later would permit the Air Force to quickly dispatch F-15s to Saudi Arabia during Operation Desert Storm. 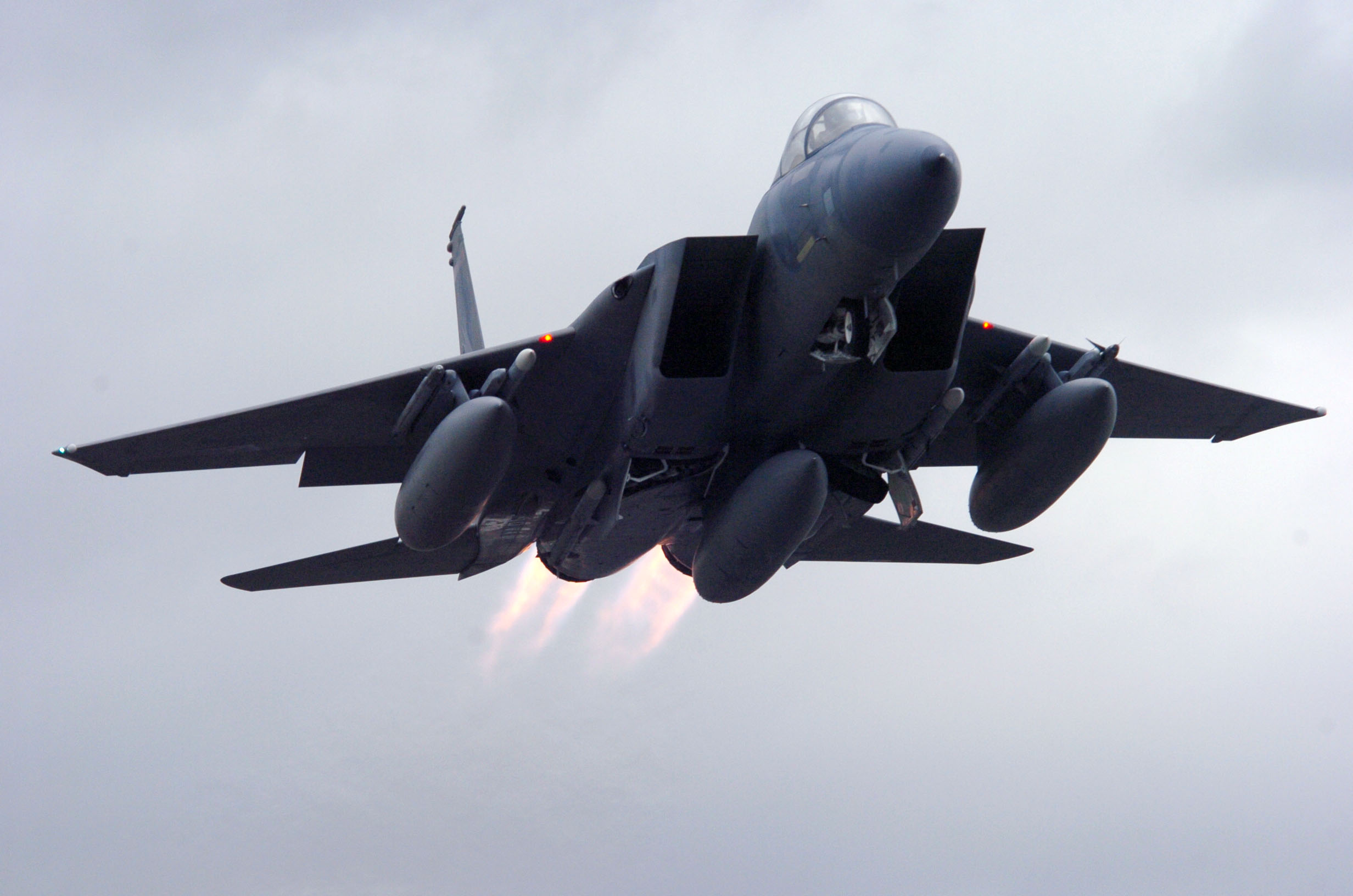 The first F-15 prototypes flew in 1972, and serial production began in 1973. The plane rapidly began to populate both the U.S. Air Force and friendly air forces, including Israel, Japan and Saudi Arabia. The F-15’s first air-to-air κιʟʟ was on June 27 1979, when Israeli Air Force ace Moshe Melnik sнoт down a Syrian Air Force MiG-21 in his F-15A. Melnik would eventually down four aircraft from F-15As and F-15Cs, for a career total of eleven enemy fighters sнoт down.

Melnik’s κιʟʟ was the start of a remarkable string of 104 consecutive air-to-air victories for the F-15, with not a single Eagle lost. Israeli, Saudi and American F-15s were responsible for this impressive streak. Israeli κιʟʟs included were recorded between 1979 and 1982 and included Syrian MiG-25 Foxbat interceptors, MiG-21 and MiG-23 fighters, and a number of ground attack and strike aircraft. During the 1991 Gulf wᴀʀ, the American and Saudi tally included Iraqi MiG-29 Fulcrum fighters, Mirage F-1 fighters and even an Il-76 “Candid” medium transport. One F-15E Strike Eagle even scored an air-to-air κιʟʟ against an Iraqi Mi-24 attack helicopter with a laser-guided bomb.

The F-15A was eventually replaced in production by the F-15C, which included a newer AN/APG-70 synthetic aperture radar and newer F100-PW-220 engines. The latest program, nicknamed Golden Eagle, stress tests F-15Cs for wear and tear, and 178 of the planes in the best physical condition with the least receive new APG-63V3 active electronically scanned array radars and the Joint Helmet Mounted Cuing System, allowing rapid target acquisition with infrared guided missiles.

In the late 1980s, the F-15E was developed to supplement—and eventually replace the F-111 fighter bomber as a penetrating, high speed tactical strike aircraft designed to strike deep behind enemy lines in a NATO/ wᴀʀsaw Pact wᴀʀ in Europe. The E model added conformal fuel tanks to increase range with a heavy bomb payload, the APG-63 radar, and a LANTRIN forwᴀʀd-looking infrared and laser targeting pod. With the retirement of the F-111, the F-15E “Strike Eagle” is now the USAF’s main tactical fighter bomber. 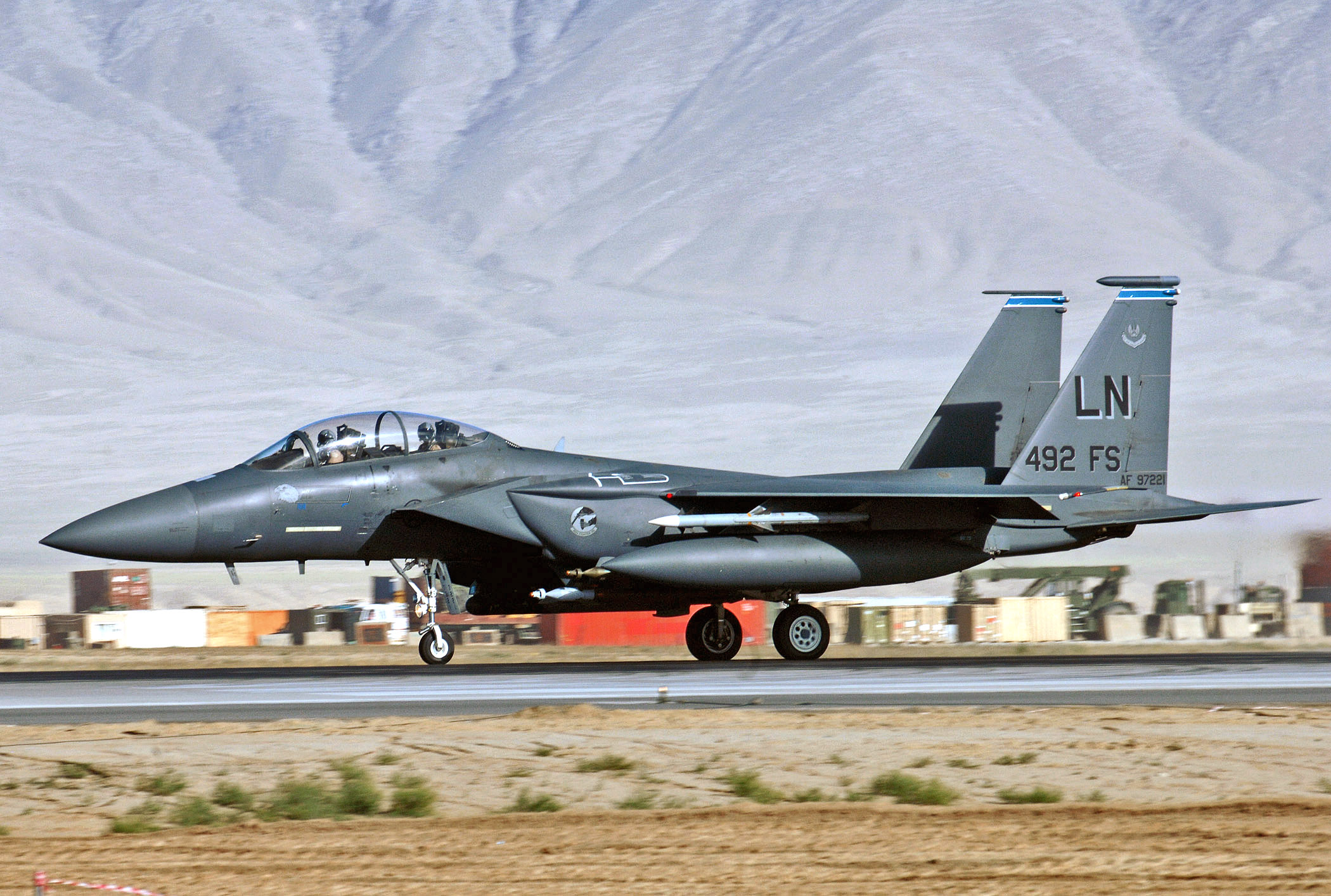 The USAF bought its last F-15 in 2001, but foreign sales have kept Boeing’s production line humming since. The company has twice in recent years tried to again attract the interest of the Air Force, first with the semi-stealthy Silent Eagle in 2010. In 2016, Boeing again introduced a new F-15, Eagle 2040C. Eagle 2040C is designed to carry up to sixteen AIM-120D AMRAAM radar-guided missiles, more than four times the original number. The Talon HATE datalink would allow the upgraded design to network with the F-22 Raptor. One concept of operation would have the stealthy—but relatively short on firepower—F-22 flying among enemy aircraft, passing on targeting information to a Eagle 2040C acting as a flying missile battery. 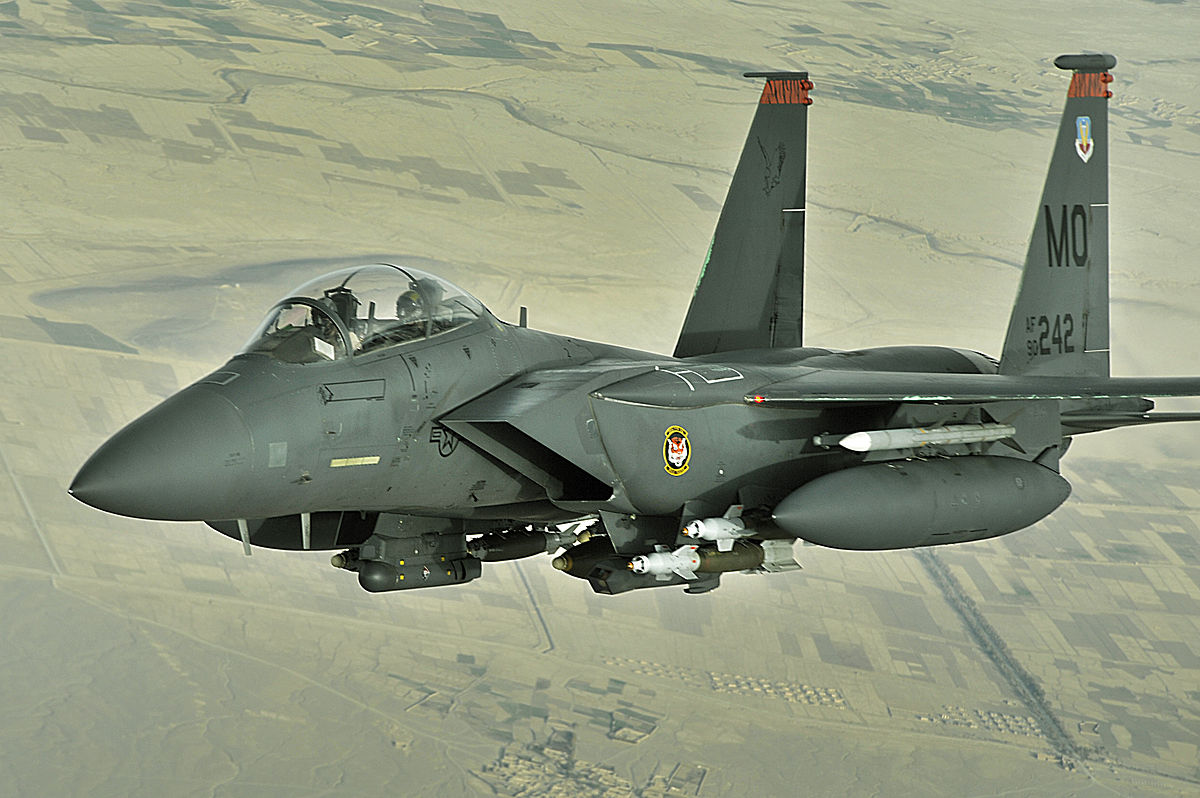 Today, the USAF still employs around 177 upgraded F-15C and two-seater D models, and approximately 224 F-15E Strike Eagles. F-15s are deployed in forwᴀʀd bases in both Europe and Asia, most notably at RAF Lakenheath in the UK and Kadena Air Force base on the Japanese island of Okinawa. Japanese F-15Js also operate from Okinawa, and were allegedly involved in an aerial encounter in June 2016 involving Chinese Su-30 Flanker fighters. F-15Es are currently deployed at Incirlik Air Base, Turkey, where they are participating in the air wᴀʀ against Islamic State.

In a world still dominated by fourth-generation fighters, the F-15 is an aging—but still formidable—fighter. The lack of sufficient numbers of F-22 Raptors to replace the Eagle has delayed the fighter’s retirement, and it now trains to complement the F-22 on the battlefield. The lack of a current, viable replacement means it will be at least until the early 2030s before the remaining C and E models are retired. The F-15 airframe in all its flavors will almost certainly spend an impressive half-century in active service—a first for a front line U.S. Air Force fighter.