Skip to content
Home Military The 5 Fighter Jets That Rule The Air For The U.S. Military

Fact: The U.S. military – stacked with planes like the F-22 and F-35 – is the best on Earth. But what planes would Russia and China fear most if a war with Washington ever broke out? While it might be disputable based on one’s needs, here is our list of the best U.S. military fighter jets as declared by an expert:

You could argue that the U.S. military has the best group of fighters in the world. Whether it is the Air Force or Navy, this fighter fleet is the envy of many. China and Russia try to develop their own warplanes to match American might. Allied countries order American fighters for their own militaries. And the United States is always upgrading existing airframes. Let’s examine the five best American fighters.

The F-35 Lightning II heads this list. It can evade enemy air defense networks and relay targeting information to other airplanes. The F-35 can fly at MACH 1.6 and is as stealthy as they come. It’s known as a flying computer that can serve as the “head coach” in a formation of drones (someday) and bombers. This means the F-35 leads the world in its acquisition of situational awareness in the sky. Its Pratt & Whitney F135 engine puts out 40,000 pounds of thrust with an afterburner. It can fight with air-to-air missiles or engage in ground strikes with precision-guided bombs. The F-35 comes in three variants for conventional take-off, aircraft carrier operations, and vertical takeoff and landing.

The 5th generation F-22 Raptor has it all when it comes to air dominance. The F-22 has great speed and maneuverability, lethal long-range munitions, unmatched radar evasion, excellent dogfighting, and enviable sensors. Two Pratt & Whitney F119-PW-100 engines give it a speed of MACH 2. Take it from an F-22 pilot. Air Force Colonel Terry Scott explained to Task and Purpose: “The flight controls … are phenomenal,” Scott said. “Having come from a fourth-generation background, it’s eye-watering how nimble the jet is. Even when I’m flying offensive against another Raptor, that airplane is eye-watering when it starts maneuvering visually.”

You only need to watch Top Gun: Maverick to see what the F/A-18 E/F Block III Super Hornet can do. Oh, I know, it’s only a movie, but the Super Hornet does not disappoint in real life. It’s a MACH 1.7 bird with a 1,275 nautical mile range. The Super Hornet has better survivability, fuel storage, and endurance compared to the earlier Hornet. After being alerted about enemy airplanes, the Super Hornet can engage bogeys in less than a minute. Infrared Sidewinders and radar-guided Sparrows make up its deadly armaments. It can also carry precision-guided bombs for ground strike. It has a reduced radar cross-section. The Navy is happy that 78 new F/A-18E/F Block III fighters will be added to the fleet by 2024.

The F-15EX Eagle II can really bring it. This is the most advanced Eagle in the Air Force inventory. Speed, weapons payload, and decreased maintenance costs are all features of the new Eagle. Two F100-PW-229 turbofans produce 29,000 pounds of thrust with afterburners and a raging speed of MACH 2.5. The range is 2,700 miles with a ceiling of 60,000 feet. The F-15EX can be outfitted with Sidewinders, AMRAAMs, and air-to-ground munitions. The airplane also features a 20mm six-barrel cannon.

The F-16 Fighting Falcon is world-famous and has been highly improved over the decades. It has been built since 1975 and at least 4,500 were produced. Now it has fly-by-wire controls. The pilot has great visibility due to the bubble canopy and heads up display. The airplane allows for easy software upgrades. The fighter is compact with excellent maneuverability and can withstand nine G’s. Avionics and navigation are top notch. The electronic countermeasure pods make it highly survivable. It is an outstanding bomber too.

Take your pick, they are all good. Depending on your mission and requirements, you can find the right fighter from this list, and you won’t be disappointed. Dog fighting, bombing, air superiority, or interception of enemy airplanes – all missions can be executed in an outstanding way. We hope you have at least one of these fighters on your own top five list. 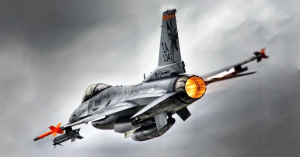