The US-2 is a capable plane that is particularly helpful during rescue operations.

In the current period, only a few countries in the world are capable of designing and manufacturing seaplanes, and Japan is one of them. At this time, the Japan Maritime Self-Defense Force are using ShinMaywa US-2 multi-role seaplanes.

A total of 6 aircraft of this type are in operation. The sixth seaplane was purchased for 12 billion yen in 2013, nearly $156 million. At such a price, US-2 can be classified as the most expensive seaplane in the world.

The development of the ShinMaywa US-2 took eight years to complete. With the Shin Meiwa US-1A fleet introduced in the 1970s beginning to reach the end of its service life, the Japan Maritime Self-Defense Force attempted to obtain funding for a replacement in the 1990s, but could not obtain enough to develop an entirely new aircraft.

In October 1996, ShinMaywa was nominated by the Ministry of Defence as a main contractor to develop advanced version of existing US-1 aircraft. The new aircraft was designated US-1A Kai. This aircraft features numerous aerodynamic refinements, a pressurised hull, and more powerful engines. Flight tests began on December 18, 2003. The US-1A Kai was re-designated the US-2 Amphibian, and was formally inducted to a squadron in March 2007. 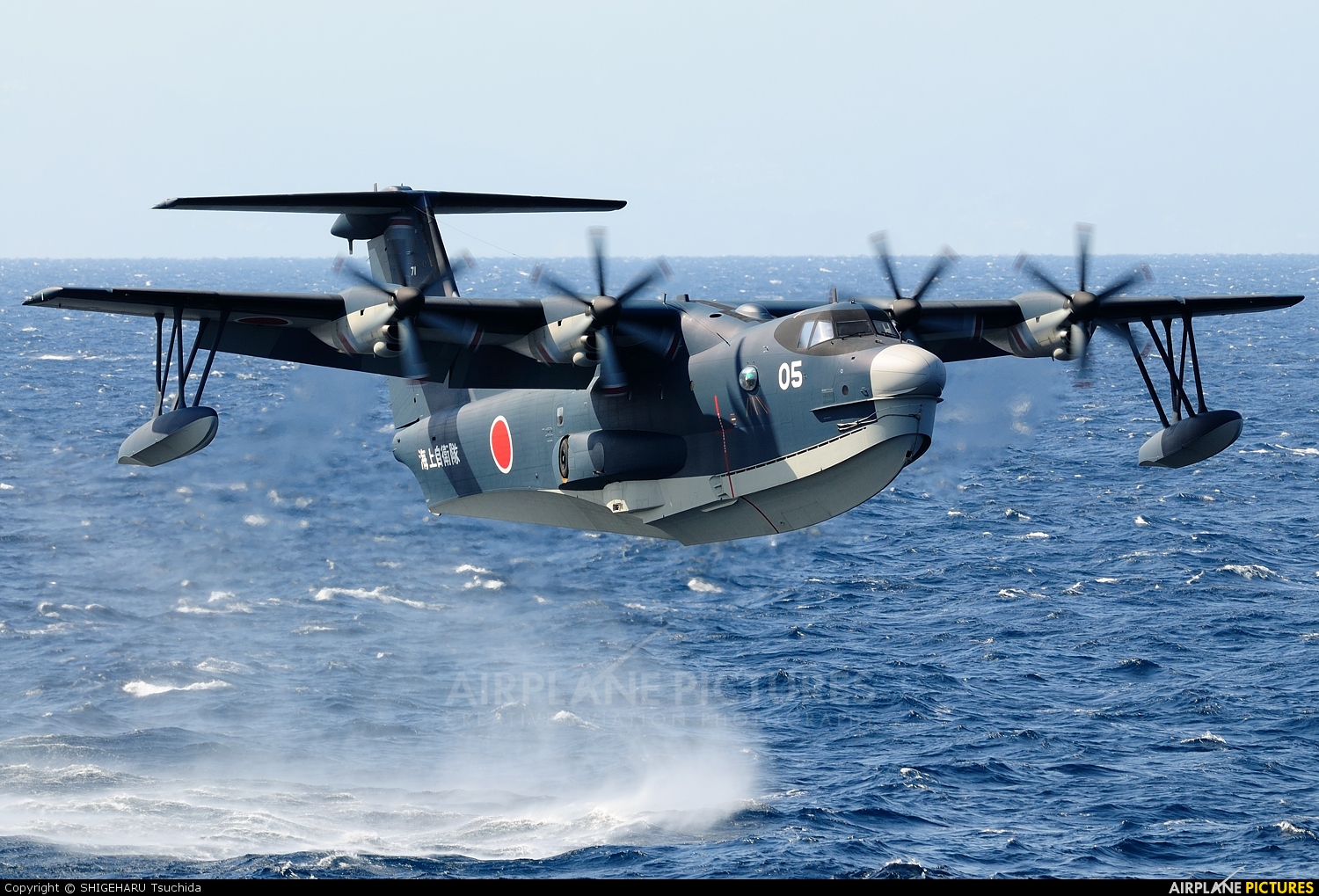 As an improved version of US-1A, the ShinMaywa US-2 inherits the design lines of its predecessor. The design of the airframe demonstrates versatility, allowing it to switch easily for missions. It could be a fire-fighting amphibian, passenger transport aircraft, or a multi-purpose amphibian.

The appearance of the ShinMaywa US-2 is no different from a traditional flying boat: a pair of straight wings on the shoulders with two engines on each wing. The tail is a typical T-type configuration. The wings and fuselage are made of composite materials with the standard dimensions of 33.5m in length, 33.2m in wingspan and 9.8m in height. 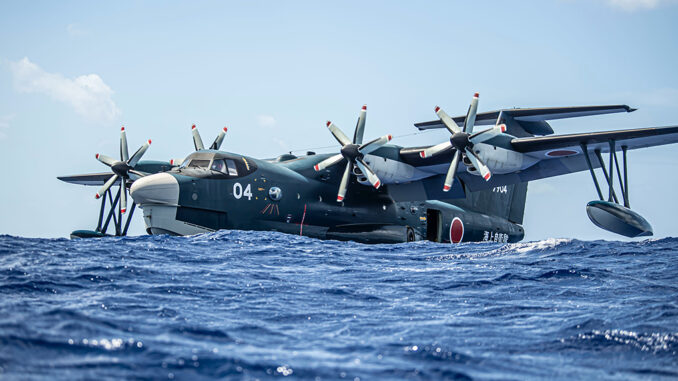 The cockpit is located just behind the sharp nose, giving great visibility forward and the engines on either side. The glass cockpit is equipped with an integrated control panel. A single LCD panel integrates the digitalised meters.

The ShinMaywa US-2 incorporates fly-by-wire flight control system, the computerised flight system improves the safety and controllability of the aircraft. Under each main wing is arranged a Pontoon float to help the plane balance on the water. The empty weight of the aircraft is 25.6t and the maximum takeoff weight is 47.7t.

The aircraft can carry up to 20 passengers or 12 stretchers. In addition, the aircraft is also equipped with a tricycle type landing gear to operate on land.

The ShinMaywa US-2 can reach a maximum speed of 560 km/h. The maximum range of the aircraft is over 4,700km and the service ceiling of 7,200m

Designed to serve the rescue mission at sea, the ShinMaywa US-2 seaplane is capable of taking off and landing on water with extremely short momentum. ShinMaywa claims that its short takeoff and landing capabilities allow the US-2 to take off and land in much shorter distances, both on land and on water, compared to commercial airline planes. 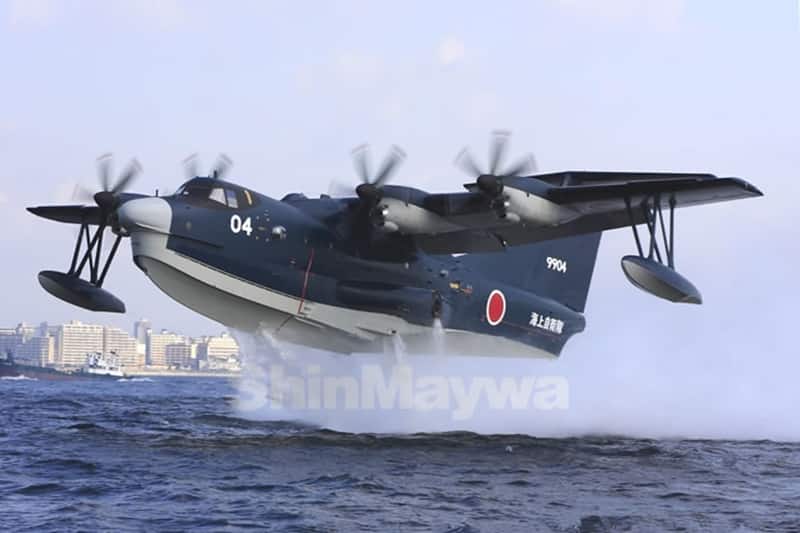 According to the manufacturer, the ShinMaywa US-2 requires only one-fourth of the distance that commercial airlines require for takeoff and landing. An additional advantage is that as an amphibian aircraft, the US-2 does not require runway construction, the company says.

The ShinMaywa US-2 is a capable plane that is particularly helpful during rescue operations. ShinMaywa says that the US-2 is the world’s only amphibian that is equipped with a Boundary Layer Control powered high-lift device, this gives the US-2 the ability to cruise at extremely low speeds, approximately 90km/h. In addition to better cruising performance, the US-2 features numerous improvements over its predecessor US-1 for safe operations even during inclement weather, it can take off and land on water with waves up to three meters high. The US-2 would also serve to be a good aircraft for ocean surveillance and preservation of remote islands. 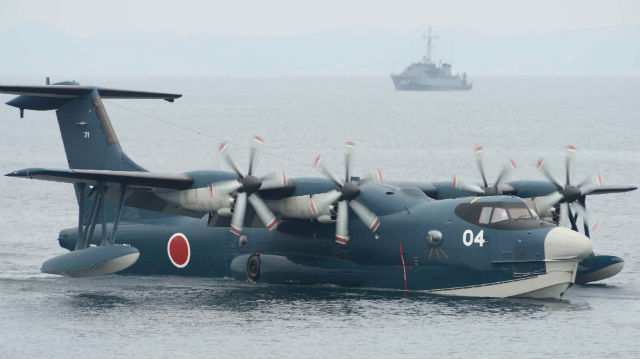 With modifications, the ShinMaywa US-2 can carry 15 t of firefighting water and fire extinguishers, which is equivalent to the amount that about 21 ordinary firefighting helicopters can carry. The aircraft can drop water with pinpoint accuracy on the area where a fire has spread. By taxiing on the surface of the water for approximately 20 seconds, the 15 tons water tank can be filled up. In case of a major fire, the US-2 can scoop up water to repeatedly extinguish fires. 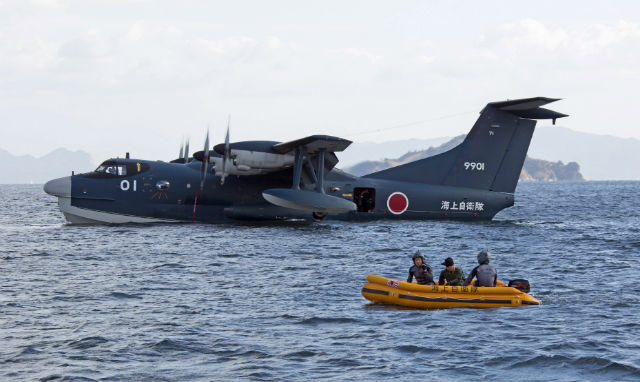 India is said to be very interested in this amphibian search and rescue aircraft in a deal that is likely to cost $1.65 billion for 12 to 18 units. India will acquire these aircraft for the Indian Navy and Coast Guard and will be stationed in the Andaman and Nicobar Islands. In October 2016, ShinMaywa reduced the price to around US$113 million per aircraft. Even so the contract was delayed, but in March 2018 Japanese ambassador to India Kenji Hiramatsu told The Hindu Business Line that talks were still in progress. The Indian government has been keen on acquiring the ShinMaywa US-2 amphibious aircraft from Japan as part of their expanding bilateral strategic partnership. There have also been reports that Thailand is interested in purchasing the aircraft and Indonesia is another prospective customer. Following deadly fires in the Attica Region of Greece in July 2018, the Greek government reportedly seeks to order US-2 to replace their aging firefighting fleet.