The G6-52 self-propelled gun-howitzer is a new artillery system developed by Denel. It is a further development of the combat proven G6 Rhino to meet demands of modern ωαяƒαяє. This new artillery system has increased firing range and increased rate of fire. The G6-52 was first revealed in 2003, however since then it is further improved. All existing G6 Rhino systems can be upgraded to the G6-52 standard. Currently this artillery is actively marketed for the export customers, however no orders were received as of 2015.

The G6-52 is fitted with a longer 155 mm/L52 howitzer comparing with its predecessor. It is also fitted with a fully-automatic αммυиιтισи loading and handling system. The G6-52 was originally developed with 23 and 25 liter chambers, however marketing is now concentrated on the 23 liter chamber, which meets the NATO Joint Ballistic Memorandum of Understanding. This artillery system comes with a modular charge system and is compatible with a Denel developed V-LAP rocket assisted projectiles, as well as standard NATO 155 mm αммυиιтισи. The G6-52 has a range of 58 km with V-LAP projectile. When firing a high-єχρℓσѕινє extended-range full bore projectile maximum range is 33 km. The G6-52 is capable of multiple round simultaneous impact firing. It can fire 5 rounds at 25 km range to hit target simultaneously. 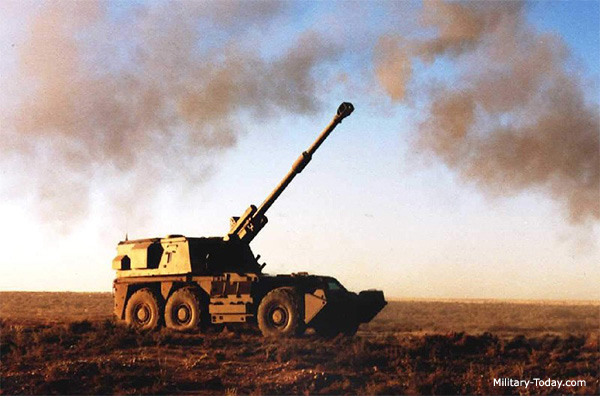 Vehicle is fitted with modern fire control system. The G6-52 has automatic gun laying and navigating systems. It can stop and fire its first round in 60 seconds from traveling. It also takes 30 seconds to leave firing position after firing, making it less vulnerable to counter-battery fire.

Vehicle has a crew of five, including commander, driver, gun layer, loader and breech operator. In case of emergency a crew of three can operate the system just as well. Aммυиιтισи reloading is semi-automatic from ground pile or αммυиιтισи resupply vehicle. Aммυиιтισи is reloaded in about 10 minutes.

The G6-52 is based on a Land Systems OMC 6×6 wheeled chassis. It is one of the heaviest wheeled armored vehicles in existence. This artillery system is powered by unspecified diesel engine, developing 525 hp. Vehicle has an automatic tyre inflation system and is fitted with run flat inserts.