Recently, Armenia signed a combined deal worth ₹2,000 crore (US$250 million) with India for 4 Pinaka batteries and other defense equipment. When this news was officially released in media, not much details were known about the MBRLs orders. Now recently, some media reports has revealed that Armenia has ordered all available 3 variants of the PINAKA MBRL. Although on paper, the PINAKA MBRL has seven versions, out of these seven three are currently in use, two are under development and two versions are in testing phase.

“Satyanarayan Nandlal Nawal, Chairman and Non-Executive Director of the Indian Private Sector Company, Solar Industries in a interview with Zee News shed some light on the recent order placed by the Armenian Defense Forces with India for its Indigenously-developed Pinaka Multi-Barrel Rocket Launcher Systems. He confirmed that Armenia indeed has placed orders for three varients of the PINAKA in a deal worth $250 million for 4 batteries”.

This recent order of the PINAKA is the first international order of a Indian-made MBRL System. PINAKA is currently operated by the Indian Army in large numbers. Presently, 7 regiments of Pinaka have now been inducted by the Army. A total of 126 launcher units are active with combine of the 7 regiments, with each regiment has 18 launcher units. An additional 3 are on order and in November 2016 the MoD has cleared an RFP for 6 more regiments. 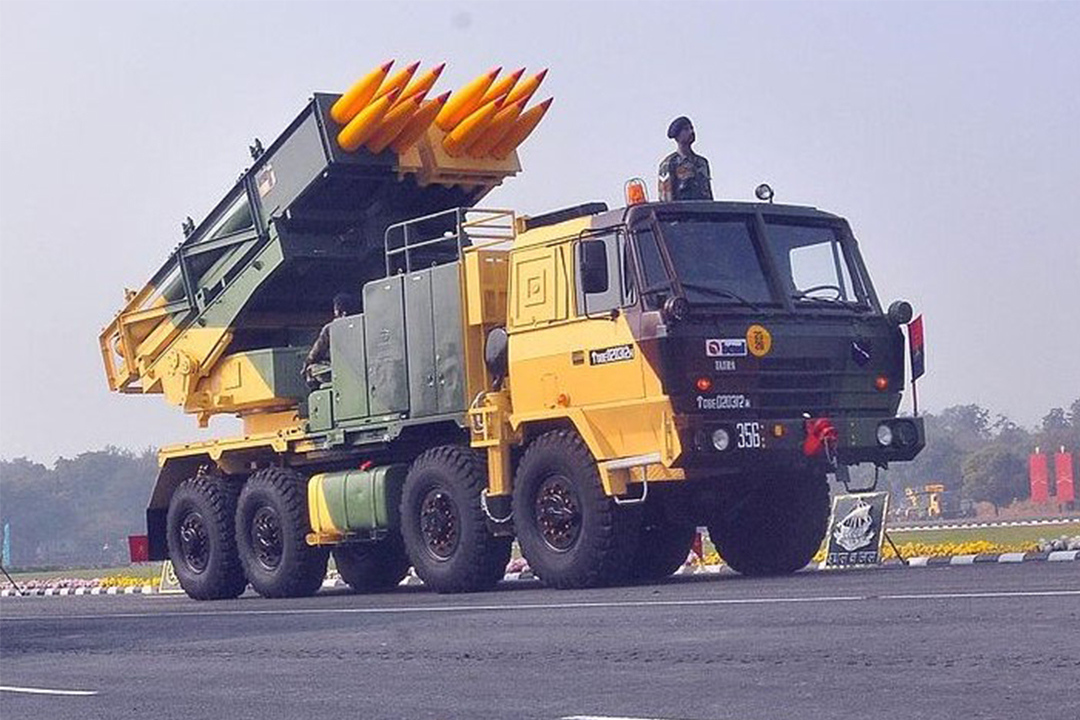 This led to the signing of a contract on 31 August 2020 for six additional regiments worth of launchers at Rs 2,580 crore from Tata Power Company Ltd. (TPCL) and engineering major Larsen & Toubro (L&T). Defence public sector undertaking Bharat Earth Movers Ltd (BEML) which will provide the vehicles will also be part of the project.

The Indian Army has plans to operate a total of 16 regiments by 2022 and increase this to 22 within the next 6 years as the older Grad MLRS regiments are retired. On 9 April 2022, DRDO successfully tested the extended Pinaka MBRL at the Pokhran ranges. The extended range Pinaka MBRL is set to start replacing the shorter range Mk-1 variant of the Indian Army soon.

The extended variant has a range from 65 to 90 km which doubles the range of the artillery that uses the DRDO-made Pinaka and Russian Grad MBRLs. In addition, the extended range Pinaka rockets can be armed with the Pinaka Area Denial Munitions which were also tested on 9 April.

PINAKA is a battle proven weapon system, it saw combat during the Kargil War, where it was successful in neutralising enemy positions on the mountain tops. 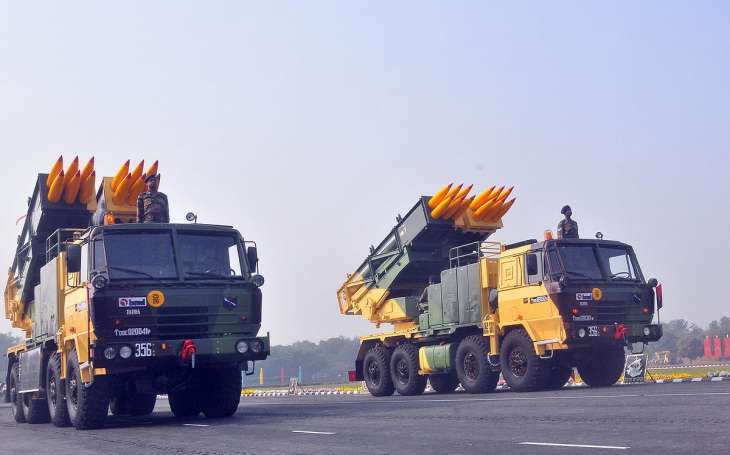 Pinaka is a multiple rocket launcher system produced in India and developed by the Defence Research and Development Organisation (DRDO) for the Indian Army. The system has a maximum range of 40 km for Mark-I and 60 km for Mark-I enhanced version, and can fire a salvo of 12 High Explosive rockets in 44 seconds. The system is mounted on a Tatra truck for mobility. 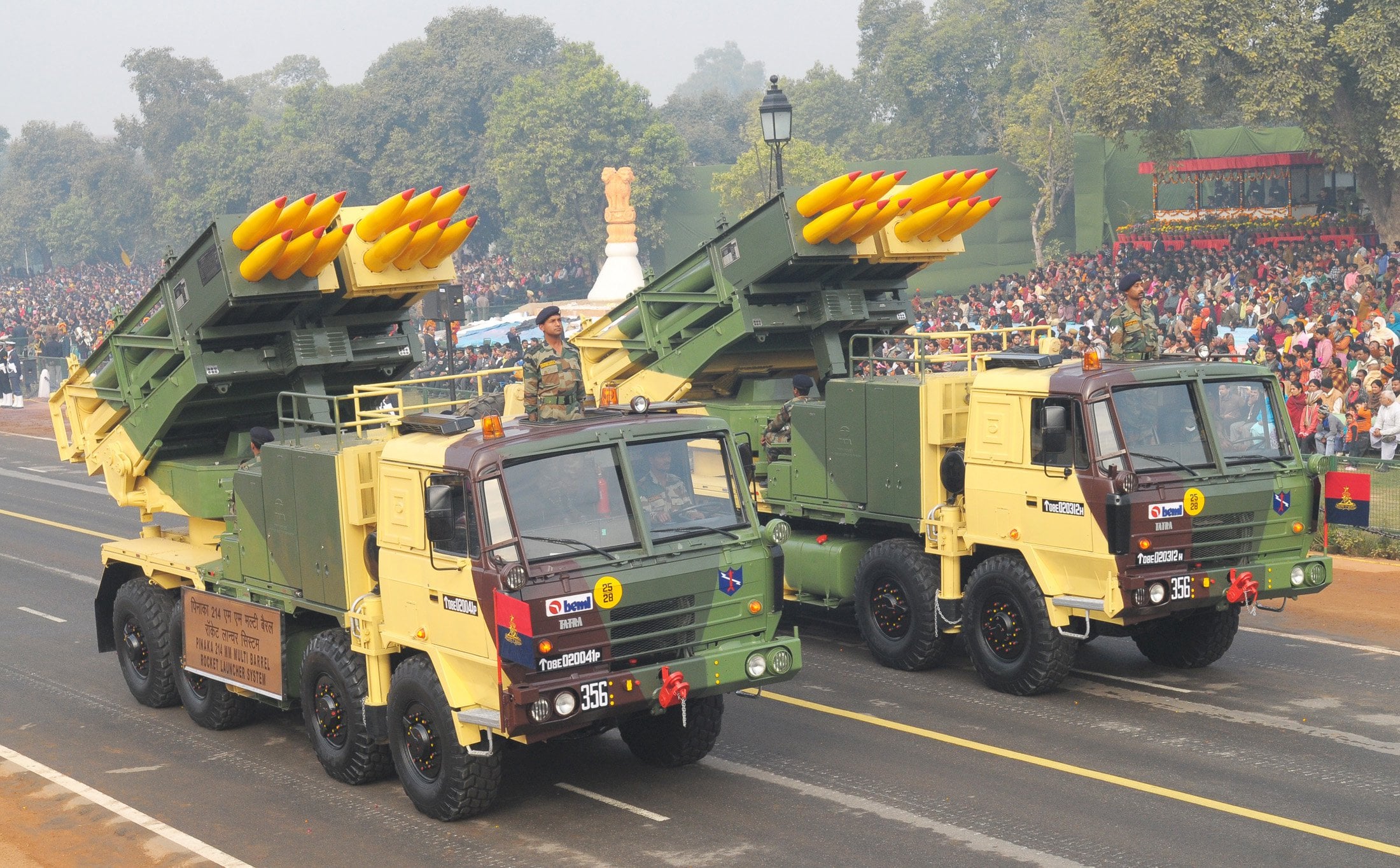 As of 2014, about 5,000 rockets of PINAKA are being produced every year while an advanced variant is under development with enhanced range and accuracy. As of 2019, an upgraded guided missile version of the system has been test-fired, with a range of over 90 km.

Pinaka was designed to meet the Indian Army need of a long-range artillery system. The weapon system is being produced since 1994 by Tata Group, Larsen & Toubro and Yantra India Limited. Pinaka is capable of firing rockets equipped with a wide variety of warheads including High Explosive, Fragmentation, cluster munition, incendiary, anti-personnel, anti-tank, mine-laying, etc.

The Indian Army generally deploys a battery that has a total of 72 rockets. All of the 72 rockets can be fired in 44 seconds, taking out an area of 1 km2. Each launcher can fire in a different direction too. The system has the flexibility to fire all the rockets in one go or only a few. This is made possible with a fire control computer. There is a command post linking together all the six launchers in a battery. Each launcher has an individual computer which enables it to function autonomously in case it gets separated from the other five vehicles in a war.

K J Daniel, Project Director, Pinaka, calls it “a system” and explains how massive each system is. A Pinaka battery has six launchers, six loader vehicles, six replenishment vehicles, two vehicles for ferrying the command post and a vehicle for carrying the meteorological radar, which will provide data on winds.