Skip to content
Home Military Why is Israel’s Merkava tank feared in the Middle East?

In the past forty years, just a handful of countries have proved themselves capable of building their own main battle tanks. One of these tank powers is actually one of the smallest countries in the world: Israel. Israel’s main battle tank, the Merkava series, is one of the best-designed tanks ever produced.

Israel’s independence in 1948 saw the formation of the Israeli Defense Forces, and the IDF cobbled together a modest, ramshackle tank force to repel attacks from neighboring Arab countries. By the 1956 ωαя the situation had improved considerably, and by 1967 Israel’s Armored Corps basically won the Six-Day ധąɾ with a blitz across the Sinai Peninsula and into the Golan Heights. The tanks, American M48 and British Centurion tanks, crushed the opposition and brought a quick end to the ωαя. 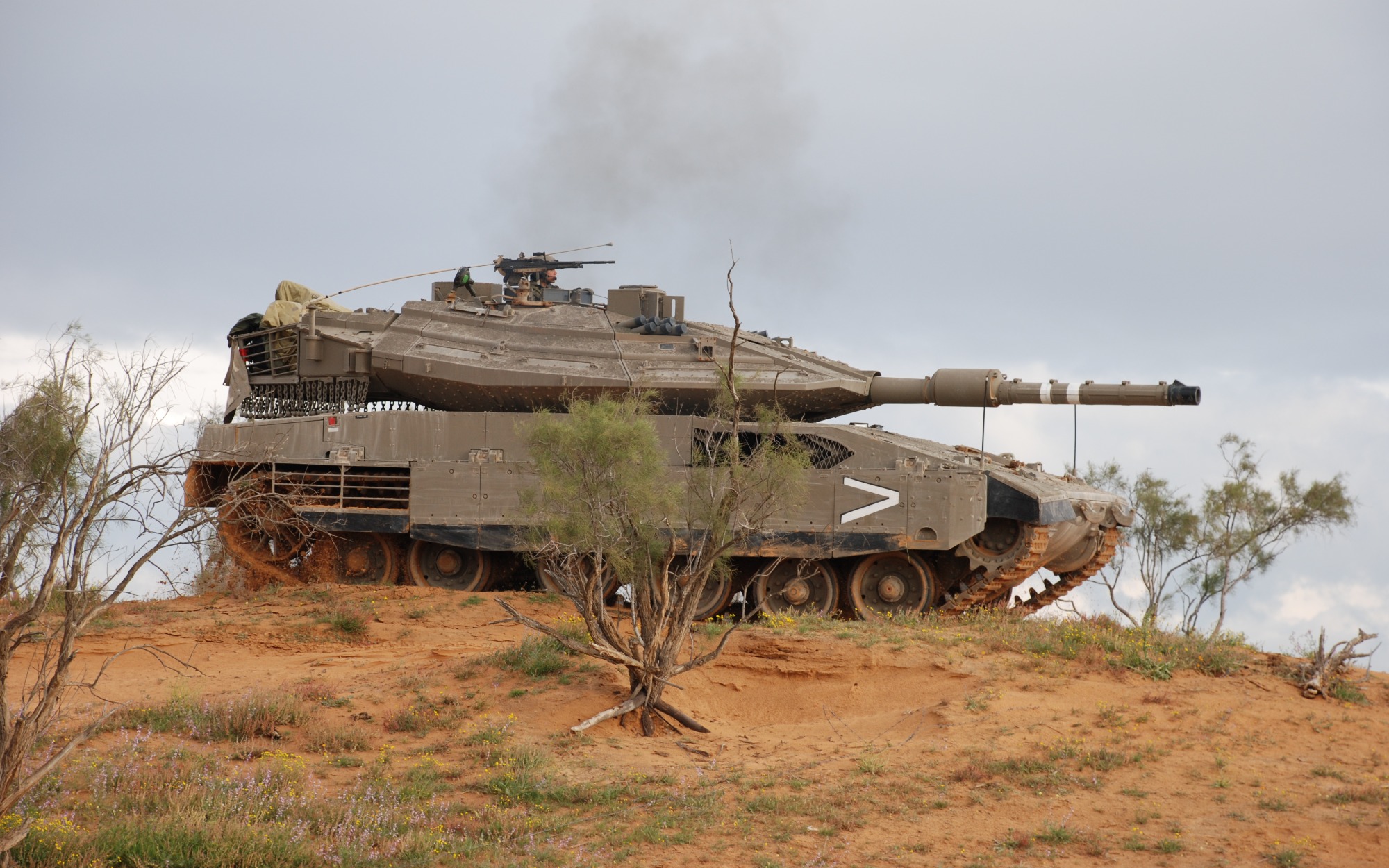 Israel’s pre-emptive attack on its neighbors was not popular with some of its European allies. The United Kingdom cancelled a joint tank-development project with Israel. France embargoed further deliveries of Mirage fighter jets and missile boats. The lesson for Israel was to decrease its reliance on foreign powers for its armaments, and in 1970 the IDF began to develop a tank of its own.

The job of making an Israeli tank a reality fell to Maj. Gen. Israel Tal, former commander of the IDF Armored Corps and who led the Eighty-Fourth Armored Division to victory in the Sinai. Tal’s project was a major challenge, as Israel’s military-industrial complex was in its infancy and the country had never built a large armored vehicle before. Working from a clean sheet, Tal could build a tank from the ground up with Israel’s tank-ωαяfare experiences baked in. Three attributes define a modern tank: firepower (the main gun), mobility (speed and cross-country operation) and protection (armor). Some tank-building countries emphasize one or two attributes over the other. In Israel’s case, Tal prioritized protection over all else. Israel’s small size meant that it felt even modest ωαяtime deaths acutely, and an emphasis on protection would keep personnel losses down.

Protection also meant that tank crews could survive to fight again, allowing tankers to survive to continue to utilize their training and act on their experience. The Israeli tank would next prioritize firepower because, survival aside, the only way to win a ωαя was to ∂єѕтяσу enemy tanks. Mobility was last—as a small country, Israel was not likely to fight long campaigns over great distances.

The Israeli tank’s emphasis on protection manifested itself in several ways. The tank featured thick spaced armor of a local design, and the hull and turret were designed with sharp angles meant to increase armor thickness through sloping. This gave the tank a sleek, futuristic look. Breaking with tank convention, the engine and transmission were located in the front of the tank, giving the crew extra protection if an antitank round penetrated the frontal armor. Hydraulic turret control, which used a flammable fluid that burned many Israeli tankers in the 1973 ωαя, was replaced with an electric control system, and ammunition was stored in fireproof canisters until use to minimize the likelihood of an ammunition explosion. 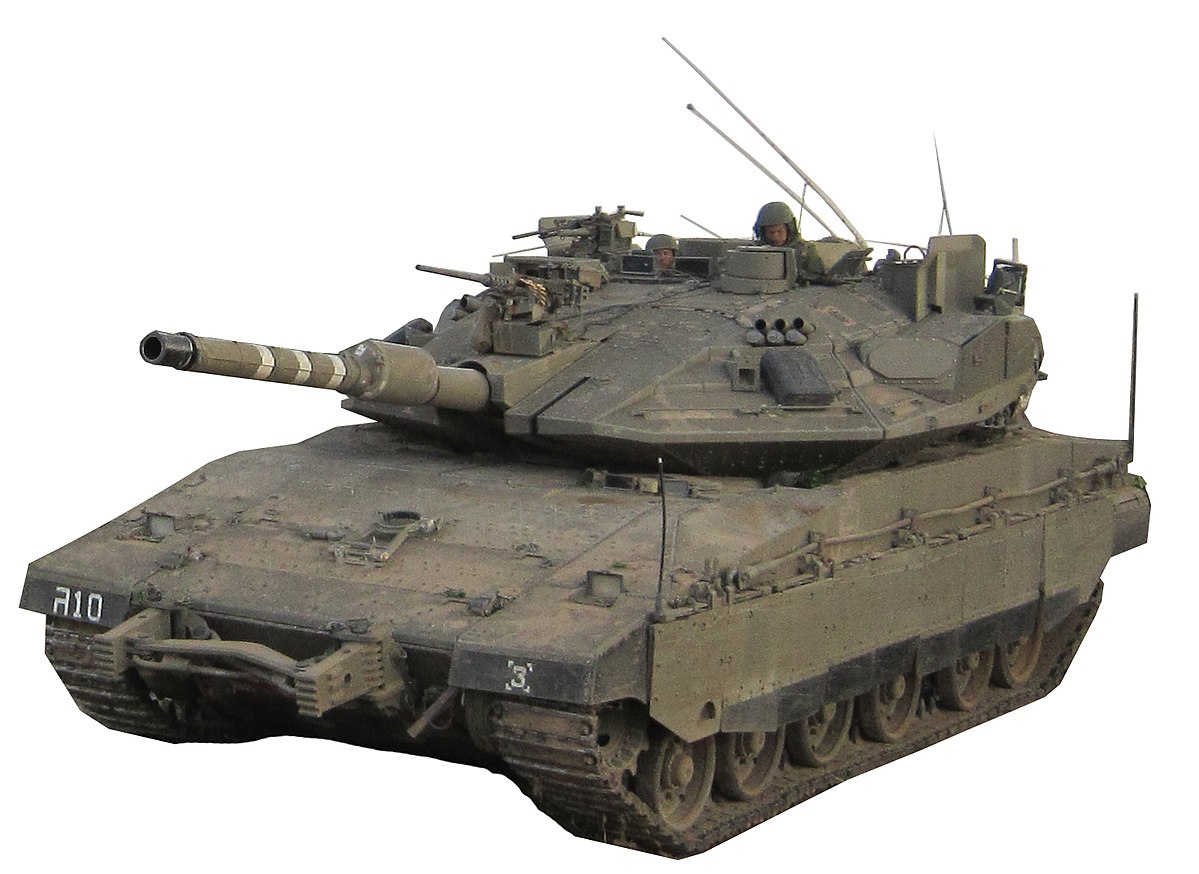 The tank’s main gun was the 105-millimeter M68 main gun, the same gun that appeared on the IDF’s Centurion, Patton and M60 tanks. The tank carried sixty-two rounds for the main gun, slightly above average, to ensure the tank could fight through ammunition supply shortages. The tank had three machine guns, including one coaxial 7.62-millimeter machine gun paired with the main gun and additional 12.7- and 7.62-millimeter machine guns up top for the commander and loader. These were useful for engaging enemy infantry, soft-skinned vehicles and antitank-missile teams, such as the AT-3 Sagger crews that took a heavy toll in the 1973 Yom Kippur ധąɾ. A burst of machine-gun fire over the heads of a missile operator could throw a command-operated antitank missile off course, saving a tank and its crew.

Mobility was the lowest of the three priorities for the Israeli tank, and the tank used just a nine-hundred-horsepower diesel engine to power a sixty-three-ton hull, for a horsepower-to-weight ratio of 14.5 to one. As a result the Merkava had a relatively sluggish top speed of just twenty-eight miles an hour. (This was in contrast to the American M1 Abrams, which had a set top speed of forty-five miles an hour and had a horsepower-to-weight ratio of twenty-five to one.) Given that Israel is just 263 miles across at its widest point, it’s hard to argue with making mobility the lowest priority. The new tank, known as Merkava (“Chariot”) was unveiled in May 1979. The tank was unlike anything fielded by other armies, particularly the United States and Soviet Union. The Merkava first saw action in 1982, when it fought Soviet-made Syrian T-72 tanks in the Bekaa Valley. Merkavas ∂єѕтяσуed several eight T-72s at ranges of up to four thousand meters, without loss to a single T-72.

Israel’s frequent ωαяs have resulted in a consistent flow of combat experience, resulting in new and progressively improved Merkava tanks. The current tank, Merkava IV, retains the Merkava I’s design priorities and incorporates a new redesigned turret, explosive reactive armor and modular passive armor for quicker battle-damage repair. It mounts a larger 120-millimeter main gun with fifty-eight rounds, including the LAHAT antitank guided missile, eighteen more rounds than the M1A2 Abrams with a similar gun. It has a larger 1,500-horsepower engine, bringing the horsepower-to-weight ratio up to 23.8 to one, and the tank is correspondingly faster.

The Merkava is protected by the Trophy active-protection system, which uses a combination of turret-mounted sensors and explosively formed projectiles to shoot down enemy tank gun rounds, rockets and antitank guided missiles. Trophy is combat proven, having saved several Merkava IV tanks (and their crews) from antitank ωєαρσиs fielded by Hamas in 2014’s Operation Protective Edge in the Gaza Strip. Israeli tankers are also set this year to experiment with Iron Vision, an augmented reality system designed to allow crews to “see” outside of their tank with a combination of VR goggles and distributed aperture system.

An iconoclastic tank in the world of heavy armor, Merkava is also a proven combat winner. While not the tank for every army, it is the perfect main battle tank for the Israeli Defense Forces. As important as tanks are to Israel’s security, the country has already started development of a successor to the Merkava IV well before it reaches obsolescence. As Israel’s enemies already know, the Merkava will be a tough tank to beat.