Archaeologists have begun a conservational thaw of the 7th century grave of an elite boy that in a scientific first, was removed from its find site in a single flash-frozen block.

That building was reused some centuries later as the final resting place of a young boy who had been buried in a chamber grave with a brick floor and thick stone slab walls and ceiling. His skeletal remains were found wearing rich accessories.

The skeleton of a dog lay at his feet. The presence of baby teeth indicates the child was no more than 10 years old when he died, but he was well-armed despite his tender age.

A sword and weapon belt adorned with gold studs marked him as a child of the wealthy warrior elite. Silver bracelets, spurs, sheet gold crosses and a bronze basin were also found in the grave.

The stone walls and ceiling of the tomb were so tightly joined that no sediments had penetrated the interior in 1,300 years. Because of this, the grave was in excellent condition, with remnants of organic materials including leather and fabric visible in the fill.

This stroke of good luck posed a challenge to conservators, however, because the remains were not encased in relatively stable soil that can be cut out in a block for the kind of laboratory excavation that can preserve even the smallest traces of archaeological material. Without load-bearing fillers, the precious, fragile remains were in danger of being jostled and damaged in transport.

To preserve the materials with as little deterioration as possible, archaeologists from the Bavarian State Office for the Preservation of Monuments  (BLfD) devised a new technique. The stone walls were removed, replaced with wooden panels for temporary protection.

A plate was pushed under the grave over the brick floor. The grave was wetted down layer by layer, and each layer flash-frozen with liquid nitrogen at -320F. The low temperature of liquid nitrogen ensures the water hardens instantly into ice without expanding or forming ice crystals as it would if it were frozen at a higher temperature.

The soil around it was then cut away with heavy machinery and the whole frozen block lifted out by crane. The whole process took 14 hours, from 3 AM to 5 PM.

The frozen grave was transported to the BLfD conservation laboratory in Bamberg. Where it was kept frozen until it could be thawed and excavated in controlled conditions. The thawing has now begun.

“The block salvage with the child’s skeleton was stored in a freezer for several months. Now the nickname of our little “ice prince” will soon be obsolete. His protective ice armor is being carefully and successively broken down through targeted heating.

Our restorer team has prepared this process meticulously,” explains General Curator Prof. Dipl.-Ing. Mathias Pfeil, Head of the Bavarian State Office for the Preservation of Monuments.

For the thawing process, the salvage block, which has been deep-frozen for several months and weighs around 800 kilograms, is brought from the freezer cell into a specially prepared room whose humidity can be controlled and adjusted according to the state of preservation of the block.

To ensure that the condensation water that is released does not damage the finds, it is drained off using a special suction device.

During breaks in processing, a cooling hood ensures a constant temperature of minus 4 degrees Celsius. Thawing is expected to take several days. Afterward, experts such as anthropologists and archaeobotanists will analyze the first material samples.

The more detailed investigation and documentation work planned in recent months is to begin later. These will probably also provide information about the circumstances of the burial, the cause of death and the age of the child.

“Numerous remains of fabric and leather, for example from the scabbard, the weapon belt, and the clothing, have been preserved.

They promise extremely interesting insights into the grave furnishings and into early medieval textile technology,” says Britt Nowak-Böck, head of the archaeological restoration workshops of the Bavarian State Office for Monument Preservation. 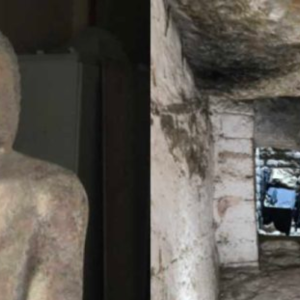