It dawned on me the other day that it’s been a little while since I last wrote a 5 Best/Top 5 list for 19FortyFive (or a 5 Worst list for that matter). It also dawned on me that whilst my previous “5 Best” articles have run the gamut of topics from surface warships to firearms to fixed-wing fighter jets, I have yet to offer any literary love to rotary-wing aircraft, i.e. helicopters AKA “whirlybirds” AKA “choppers” (cue Arnold Schwarzenegger: “Get to da choppa!”). With that in mind, for now, we shall narrow it down to attack helicopters i.e. helicopter gunships. To narrow it down further, we shall limit it to choppers that have been proven in combat. 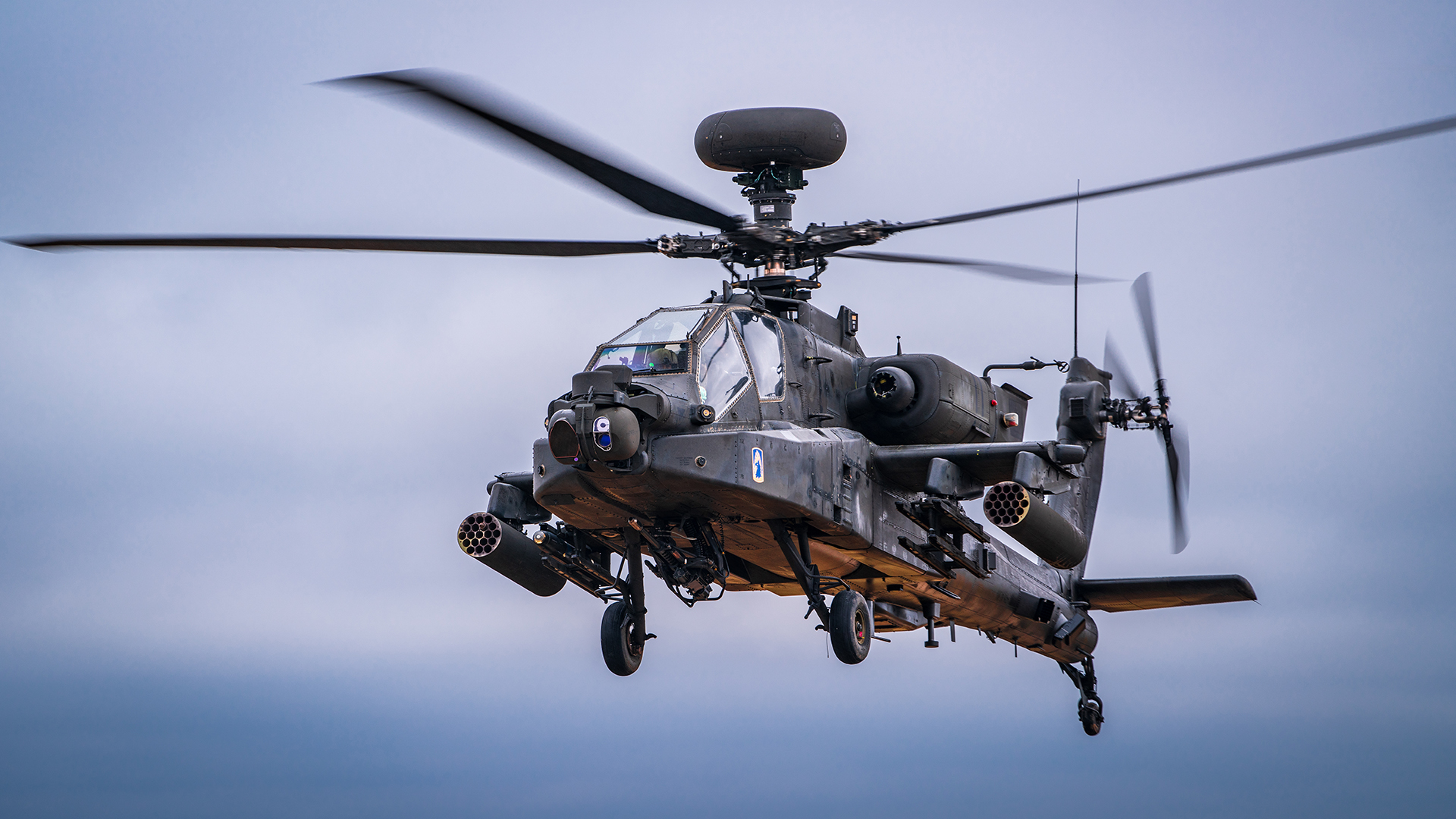 Originally built by Hughes Helicopters (now known as MD Helicopters) and currently manufactured by Boeing, the Apache made her maiden flight in September 1975 but didn’t actually enter into operational status with the U.S. Army until April 1986. She was worth the wait. The Apache received her “baptism of fire” during Operation Just Cause in Panama in December 1989 in a high-precision assault on the Comandancia building of Manuel Noriega’s Panamanian Defense Forces (PDF).

However, it was during Operation Desert Storm in 1991 that the Apache truly made a name for herself. The AH-64 fired the first shots of the campaign, knocking out two key early-warning radar installations in western Iraq and thus clearing a detection-free corridor for U.S. Air Force jets en route to bombing Baghdad; from there, Apache crews went on to destroy more than 500 of Saddam Hussein’s main battle tanks (MBTs).

In her current iteration, the Apache packs quite a punch, to the tune of the M230 30mm chain gun, Hydra-70 and CRV7 70mm air-to-ground rockets, the AGM-114 Hellfire missile, and AIM-92 Stinger. 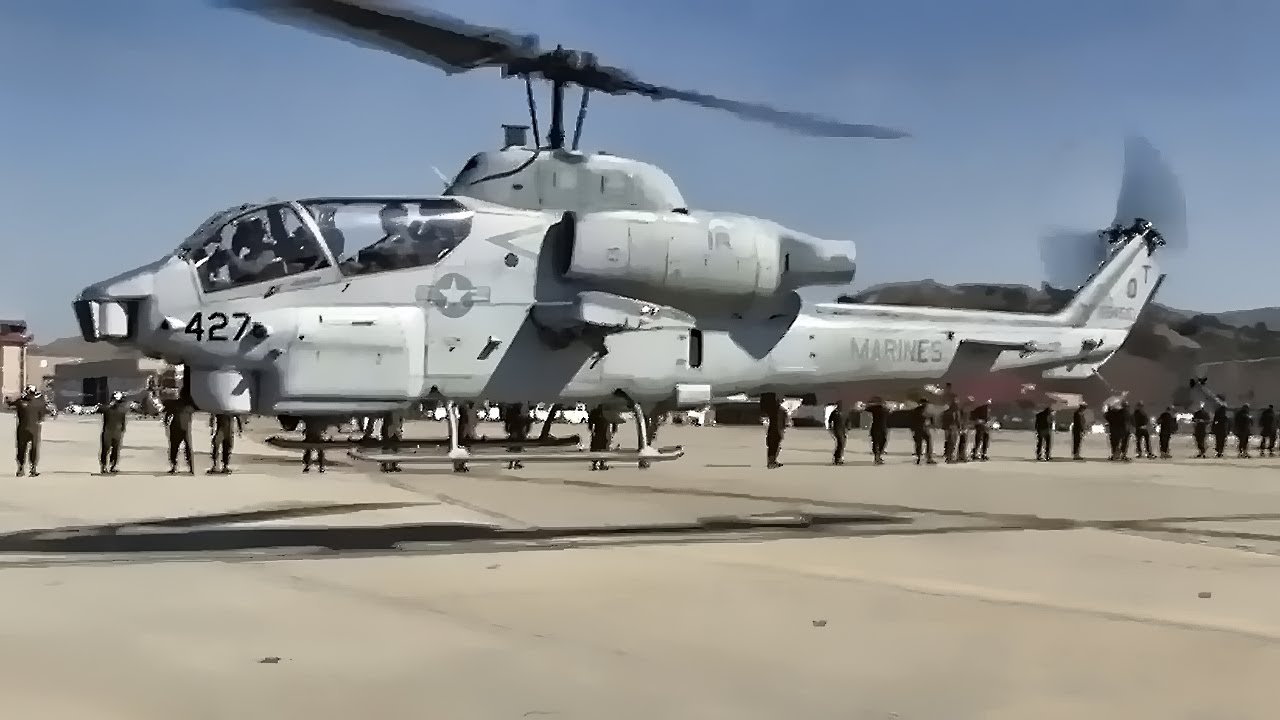 The venomous snake known as the cobra has served as the namesake for several ᴅᴇᴀᴅly flying machines, from the WWII P-39 Airacobra fighter plane and her P-63 Kingcobra successor … to the Cobra helicopter gunship.

The U.S. Marine Corps finally retired the AH-1W Super Cobra AKA “Whiskey Cobra” in October 2020, but the whirlybird had one hell of a ride along the way. The first version of the Cobra chopper, the AH-1J, performed interdiction duties on behalf of both the Army and Marine Corps against the Ho Chi Minh Trail from 1969 to 1972 during the Vietnam ധąɾ. In the 1980s, USMC Cobras flew close-air-support (CAS) missions during Operation Urgent Fury in Grenada and sank three Iranian patrol boats during Operation Praying Mantis.
But as with the Apache, it was during Operation Desert Storm that the Cobra had her greatest moments of glory, кιℓℓing 97 Iraqi MBTs, 104 armored personnel carriers (MBTs), and two AAA sites in exchange for zero combat. 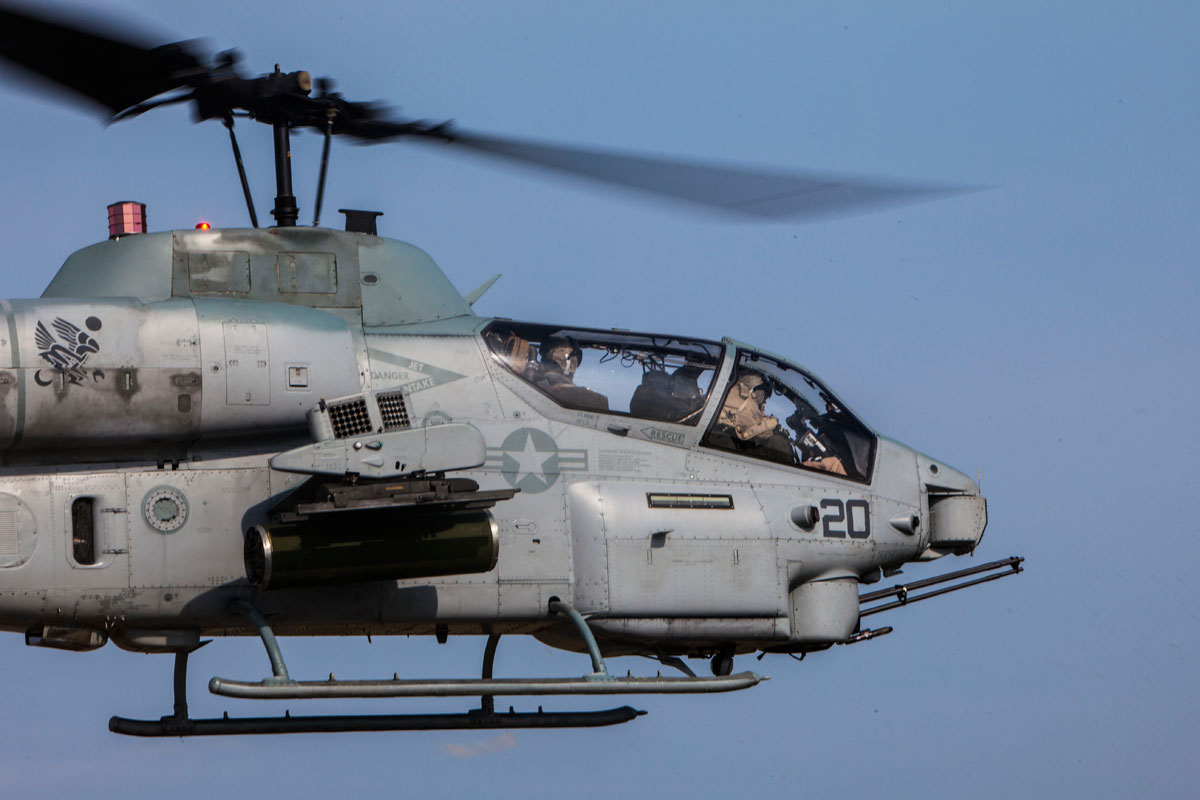 The Cobras racked up their кιℓℓ tallies via their three barrel, 20-millimeter cannon, TOW and Hellfire anti-tank missiles, 70- and 127-millimeter rockets, and Sidewinder air-to-air missiles.

Going forward, the USMC has found a worthy successor to the Whiskey Cobra in the form of the Bell AH-1Z “Viper” (not to be confused with the F-16V Viper). 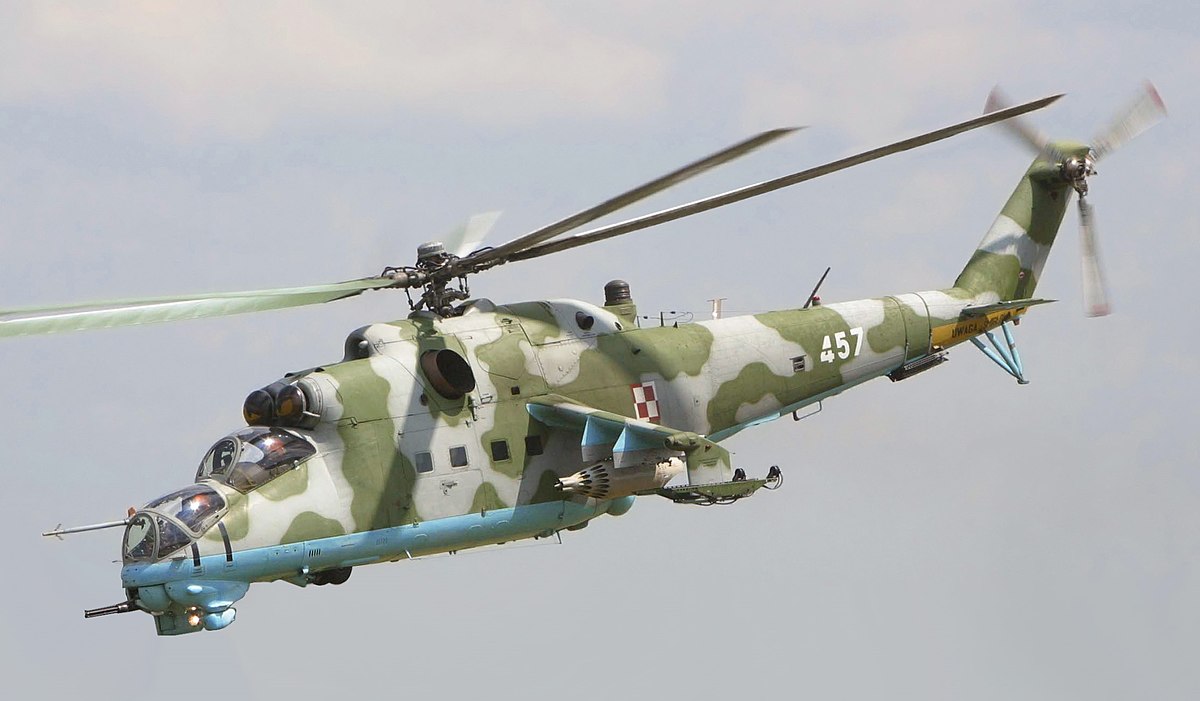 When one thinks of Russian/Soviet attack helicopters, chances are the Hind is what comes to mind. The Mi-24 entered Soviet service in the late 1970s, starting off as a troop transport, but reconfigured as a gunship starting with the Hind-D variant. It was the Hind-D that wreaked havoc against the mujahideen during the Soviet invasion and occupation of Afghanistan from 1979 to 1989, motivating the CIA to supply Stinger missiles to the Afghan rebels (as dramatized in Ken Follett’s bestselling novel Lie Down with Lions). It also enabled Saddam Hussein to swiftly and brutally crush a Shiite rebellion in southern Iraq in March 1991.

The Hind has seen action in more than 40 wαяs and has been deployed by more than 40 countries. The chopper’s arsenal is a fearsome one: depending on the variant, a Yak-B four-barreled 12.7mm machine gun with a firing rate of 4,000-4,500 rounds a minute, a 30mm fixed gun mount, or a 23mm, built-in, flexibly mounted gun; the Mi-24P and Mi-24V have four underwing pylons for up to 12 anti-tank missiles such as the Shturm (NATO reporting name AT-6 Spiral). We Are the Mighty columnist Logan Nye – himself a former U.S. Army journalist and 82ndAirborne Division paratrooper – actually rates the Russian Alligator as the best attack helicopter in the world. His rationale: “Capable of operating at high altitude and speed, the two-seater Ka-52 snags the top spot from the usual winner, the Apache. The Alligator’s anti-ship missiles have better range than the Apache and the helicopter boasts similar armor and air-to-air capability.”
The Ka-52 has certainly been used to ᴅᴇᴀᴅly effect during Vladimir Putin’s “special military operation” in Ukraine. The flip side to that is the Alligator has been turned into a fried gator tail, so to speak, on multiple occasions by the Ukrainian defenders. 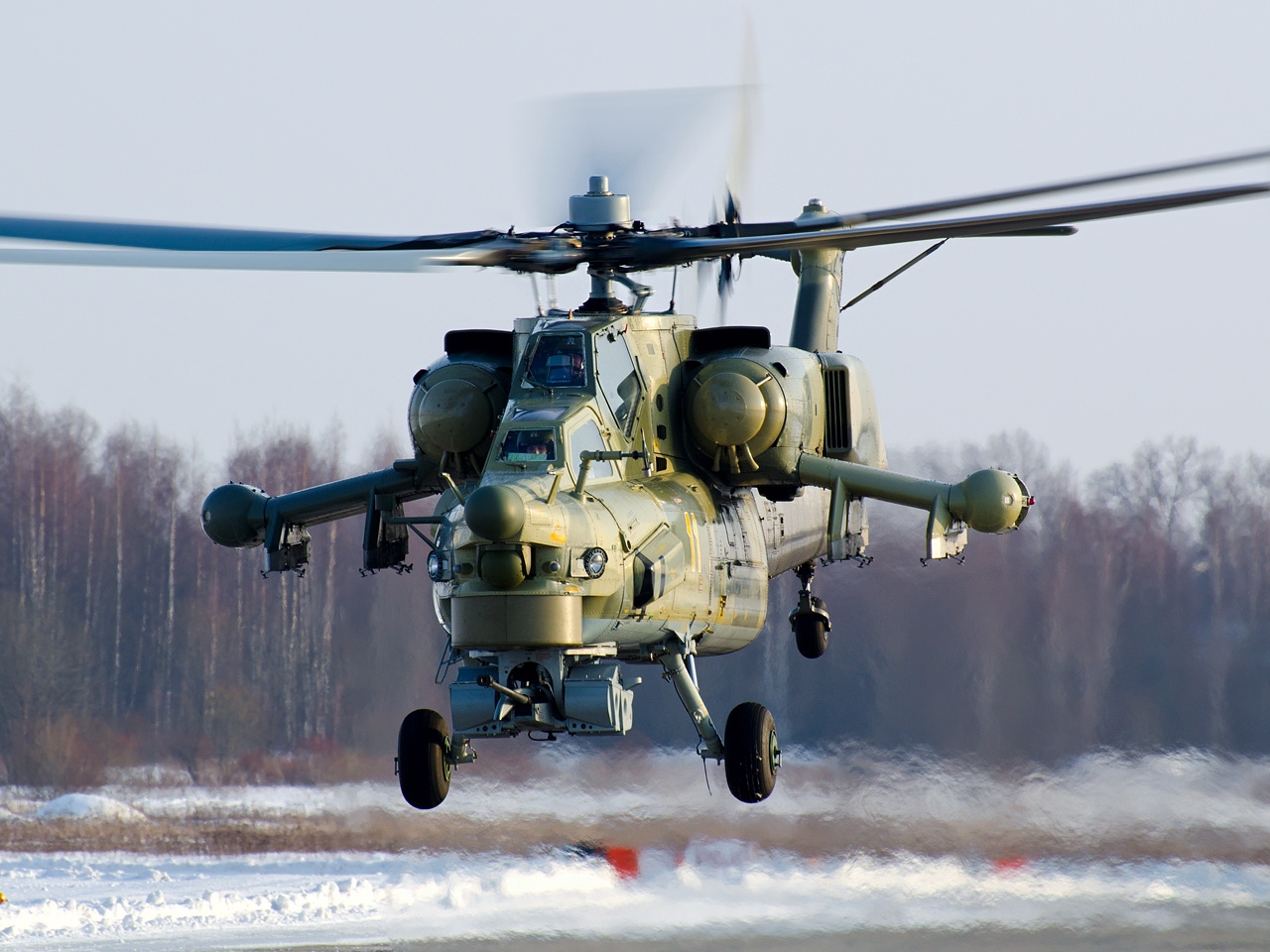 This is the successor to the Hind, making its maiden flight in 1982 but not entering into Russian service until 2009. Logan Nye rates this the #3 best attack helicopter in the world, just behind the Apache: “[T]he ‘Havoc’ carries anti-tank missiles that can pierce a meter of armor. It also has pods for 80mm unguided rockets, five 122mm rockets grenade launchers, 23mm guns, 12.7mm or 7.62mm machine guns, or bombs. It also has a 30mm cannon mounted under its nose.”

The Havoc made its combat debut during Russa’s intervention in Syria, specifically during anti-ISIS operations in the battle for Palmyra, and has also been used heavily in Ukraine. Meanwhile, the Iraqi Air Force (IqAF) put the Mi-28 to good use for its own anti-ISIS operations during the Battle of Ramadi in 2015.